The natural history of Kamikochi is one of great elemental upheavals occurring over many thousands of years, though some of these were also quite recent. The mountains and valleys were shaped in part by glacial activity, evidence of which can still be seen in some of the most prominent peaks. Another major player in the formation of the area was Mt. Yakedake, whose eruption over 14,000 years ago changed the course of the Azusa River, causing it to run through the basin in which present day Kamikochi and Matsumoto are located. 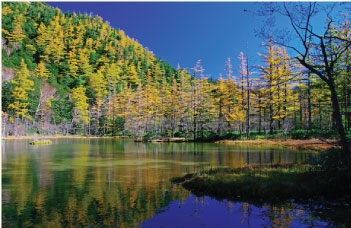 As it turned out, Mt. Yakedake would again play a role in shaping Kamikochi’s landscape when another eruption in the summer of 1915 dammed the Azusa River, creating Taisho Pond. It should be mentioned that Mt. Yakedake is the only active volcano in the Northern Alps and still proclaims its fury to the heavens by constantly emitting a plume of smoke.

Mountain Culture – From Religion to Recreation

Prior to the arrival of European alpinists in Japan in the 19th century, climbing mountains had always been thought of as an ascetic pursuit, suited to priests and monks. Japan’s animistic native religion of Shinto views divinity as being present in every part of the natural world, but mountains have a special prominence due to them being closer to the gods.

The spiritual view of mountaineering can be found in written records from the Nara Period (710-794) and the Heian Period (794-1185) which detail various excursions to the hills motivated by spiritual aims. Many centuries later in 1828, the priest Banryu famously climbed Mt. Yari and founded a temple there. Then in 1878, William Gowland, an English surveyor, employed by the Meiji government, became the first foreigner to summit Mt. Yari. Gowland’s motives appear to have been those of adventure and exploration rather than religious enlightenment and, in this respect, he started something of a trend. 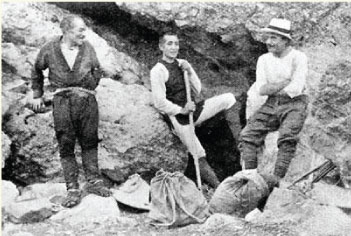 It is a testament to this man’s versatility, genius, and adventurous spirit that, in spite of his alpine legacy, Gowland is now better remembered as “the father of Japanese archeology” for his work in surveying ancient burial mounds of the Kofun Period.

Another fine Victorian gentleman more specifically identified with alpine culture was Walter Weston. Hailing from Derby County, Weston was a clergyman, teacher, and polymath whose love of athletics rivaled his unquenchable thirst for knowledge. Following Gowland’s example, he climbed Mt. Yari in 1891 and also adopted the curious coinage of “alps” when he wrote about his experiences in “Mountaineering and Exploration in the Japan Alps” (Can be read online here). The book was an instant classic of travel literature and would help spread the fame of Japan’s fledgling alpine culture to other countries. In Japan, Weston’s main contribution to popularizing alpine sports in Japan was helping to establish the first Japanese Alpine Club in 1905. For this and other achievements in the field, he has become known as “The Father of Mountaineering in Japan.”

Today, Weston’s legacy is honored annually at the Weston Festival, which includes wreath laying and other ceremonies held at his memorial relief near Kappa Bridge.

The Development of Kamikochi 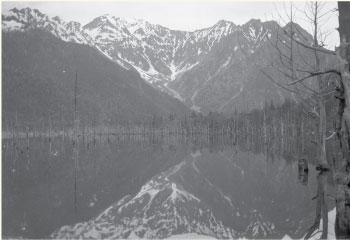 Today, Kamikochi is popular with international visitors as well as with the Japanese. In 2016, amid a minor boom in tourists traveling to Nagano Prefecture, Kamikochi and its parent city Matsumoto were selected to host the inaugural celebration of Japan’s newest national holiday, Yama no Hi (or Mountain Day). As well as being a great honor, it is a very positive sign of the bright future awaiting Japan’s favorite mountain getaway.

Rev. Weston’s book “Mountaineering and Exploration in the Japanese Alps” published in London

Kamikōchi nominated “most beautiful valley” in Nippon Hakkei (Japan’s Eight Most Scenic Landscapes), bringing national recognition. Designated as a Natural Monument and as a Place of Scenic Beauty.

Ropeway plan proposed but not realized

One million estimated annual visits exceeded for the first time

Ban on private cars is introduced

Start of tipping at toilets system

A Buddhist priest from Toyama region, Banryu (1786-1840) was said to be the first climber of Kamikochi mountains. In Banryu’s era, mountain climbing was practiced as natural worship according to the doctrines. As time shifted to the Meiji Period, mountain climbing was introduced as a leisure and sport activity by some Westerners. 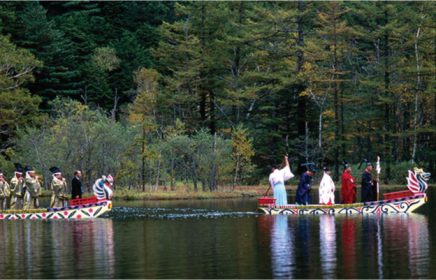 Every autumn, a number of shrine festivals called “Ofune Matsuri” are held across the Azumino area to give thanks for the harvest. People parade with boat-shaped floats to commemorate the Azumi tribe, a seafaring people who fished for a living. The most famous one is held at Hotaka Shrine in Azumino City (Sep. 26 – 27). At Myojin, the Zen-like pond and shrine form the backdrop for a unique annual festival where real boats are still used.

The Torii gates of this shrine marks the boundary between area of humans and the Kami spirits who traditionally inhabited the mountainsides.

Although today’s Kappa souvenirs look like cuddly Disney characters, their origins are more fearsome; the mythical creatures originally appeared in Japanese folklore as a type of water sprite much like the Scottish Kelpie used to scare children away from dangers lurking in water. 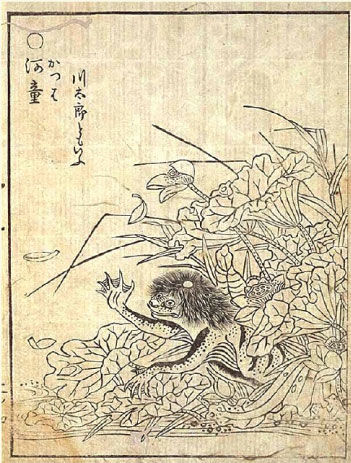 A notable feature of the kappa is the saucer-shaped depression on their scalps, which must at all times be filled with water if the kappa is to retain its strength and powers. Should the depression be emptied of water, the kappa will instantly be weakened and may even die if the water is not restored.
Kappa are usually seen as mischievous troublemakers. Their pranks range from the relatively innocent, such as loudly passing gas or looking up women’s kimonos, to the more troublesome, such as stealing crops or kidnapping children. In fact, small children are one of the gluttonous kappa’s favorite meals, though they will eat adults as well. They feed on these victims by sucking out their shirikodama, a mythical ball inside the anus. The only food they love more than small children are cucumbers!
Read more on Wikipedia.