Home > Journey Journal > Advisory > Special > Azusa: Nature and Culture Flow as One in the Sacred River

On Saturday May 19th, I had the pleasure of taking part in an event called the “Mizu Walk” along the Asuza River. 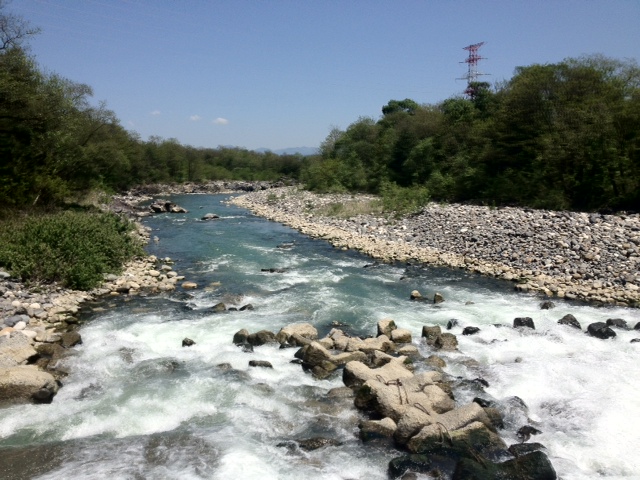 In addition to much needed exercise, it gave me occasion to think about the significance of rivers in general and the Azusa in particular. Like all rivers, the Asuza is an invigorating presence in the communities through which it flows and to which it gives a sense of connection. But it is also more than that. A survey of local history reveals both a deep religious significance and a connection to ancient culture as fascinating as it is mysterious.

My journey up the Azusa river began at the “Mizu Walk.” Sponsored by the Yomiuri Shimbun, the event brought together more than five-hundred people for a walk along a section of river beginning near Azusabashi.  Many participants were nearing or past the age of retirement and included both hiking enthusiasts and more casual walkers.  We were given the choice between guided strolls, with volunteers providing information about local plant and animal life, and a brisk twenty kilometer hike.  Having opted for the latter, I can say that keeping pace with the head of the column was no easy task.  The weather was perfect with clear skies and a gentle breeze giving relief from the blazing sun. 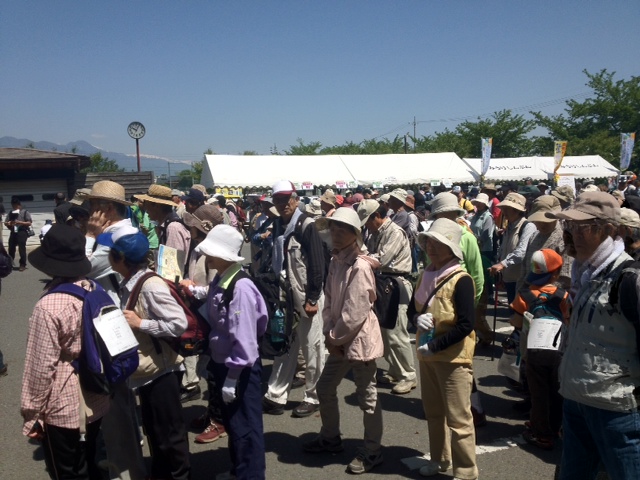 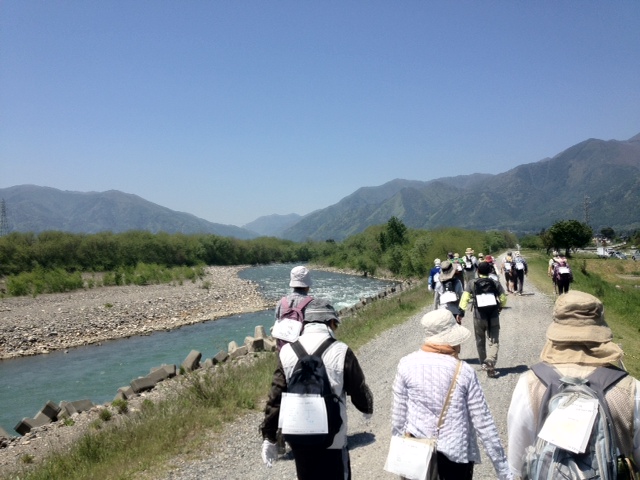 As we moved upriver, the power lines and tide-breakers gradually thinned out and there was a familiar sense of moving away from civilized life toward a more natural setting.  Looking into the clear, luminous water of the Azusa, I was reminded of my last trip to Kamikochi years before.  At that time, the distinctive hue of the water running throughout the park had made a deep impression on me.  Eventually, our group stopped for a brief rest as we neared the turning point which would lead us back to the starting line.  As I crossed the bridge and began my return downriver though, I resolved to go back to Kamikochi and revisit the Azusa nearer to its headwaters.  What I hadn’t realised was that this newfound interest would lead me on two journeys: one geographical, the other historical.

Returning to the Source

Those familiar with local geography know that the Asuza River flows from deep within Kamikochi, whose water is venerated for its great purity.  The animistic religion of Shinto, which finds divinity in all of nature, also attaches great importance to ideas of purity and purification.  This can also been seen in the custom of washing one’s hands and mouth with spring water before entering a Shinto shrine.

The water from the snow of Kamikochi’s mountains is treated with great respect and provides the subject of a yearly ritual.  In October of every year, the Hotaka Shrine in Azumino City shows gratitude for the gift of water through two ceremonies: the “Omizu-tori” and “Omizu-gaeshi” (“drawing water” and “returning water,” respectively).  In the first ceremony, water is drawn from the spot where three rivers meet in Azumino.  Then, in the second ceremony, the water is taken back to its source in Kamikochi and poured into the deepest section of Myojin Pond.  In addition to paying tribute to nature, the ritual also gives thanks to the god said to preside over the Hotaka and Hotaka Oku-Miya shrines.  Interestingly, it is a god of the sea.

As it turns out, the relationship between these two shrines is founded on a shared history so long and complex that even experts on the subject are at a loss to explain some of the finer points.  The city we now call Azumino takes its name from the Azumi-zoku (安曇族, formerly 阿雲族), an enigmatic group of people first known to have lived in Northern Kyushu early in Japan’s recorded history.  What little we know about them tells us that they were a seafaring people and that they migrated from Kyushu to various locations around Japan in the sixth century for reasons which are now unclear.While most of the new settlements were in seaside areas where the Azumi folk could continue with their seafaring ways, a rare exception can be found in what is now called the “Matsumoto Basin,” an inland area which includes both Matsumoto and Azumino Cities.

Traces of and Ancient Culture

Without direct access to the sea, the emigrants found themselves taking up farming in the place of fishing.  Even so, their descendants preserve the memory of their heritage through local festivals.  Hotaka Shrine and Hotaka Shrine Oku Miya each holds and annual event called the “O-fune Matsuri” (boat festival), as does my own neighborhood shrine in Matsumoto.  In Satoyamabe, festival floats in the shape of boats are paraded in and out of a local shrine during Golden Week in a ritual petitioning the gods for a good harvest (and, by extension, for water).  Later, toward harvest time, Shrines around Azumino City bring out their own ship-shaped floats.  The sight of these magnificent vessls moving between the rice fields is said to resemble a ship plowing through the ocean waves.  These events differ in certain details, but have a common nautical theme which confirms its place in the cultural memory. 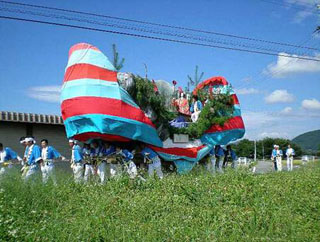 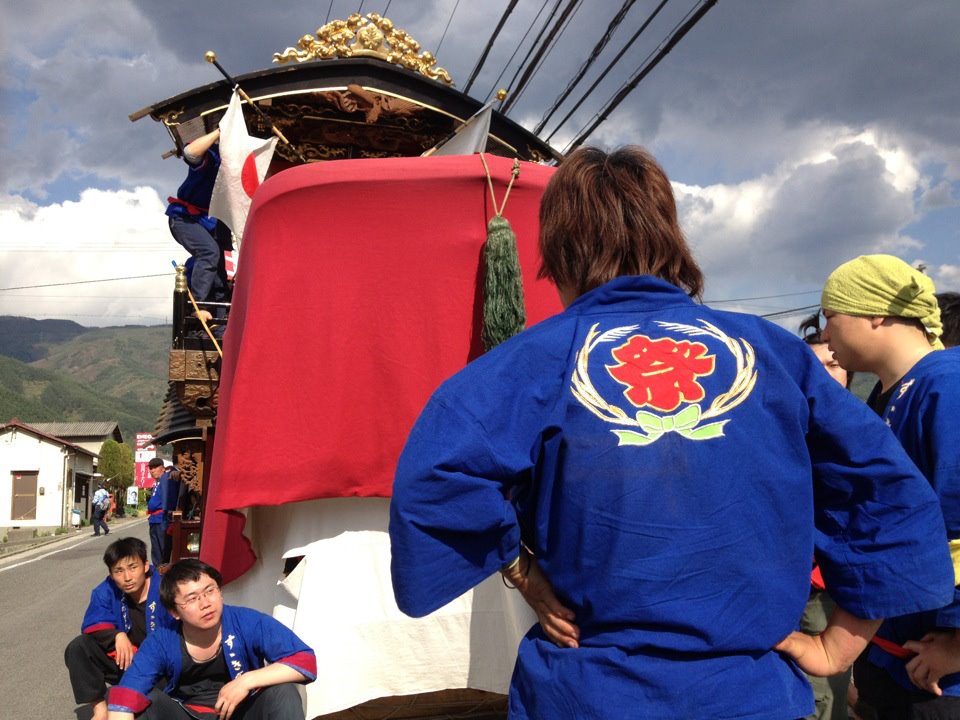 Evidence of a seafaring past:

And this brings us back to the more universal theme of water.  In travelling from Kyushu to Shinshu, the Azumi people went from being sea folk to mountain folk.  As farmers, though, they still needed water to irrigate their fields and fittingly the rivers flowing down from the mountains became their primary source of water.  And flowing from the heart of Kamikochi, these rivers ran through the settlements like threads uniting a displaced people.

It was with this in mind that I joined a friend for a hike up to Kamikochi’s Karasawa huts the following week. This time, the journey would take us further up the Azusa and across very different terrain. We followed the river up to Yokoo Bridge before crossing to embark on the Karasawa Route.  The first part of the route follows one of the Asuza’s tributaries upward as the level path gradually gives way to a rocky gradient and eventually a snow-covered trail.  Before strapping on our crampons to begin the brisk hike up to the huts, we paused by the last visible section of flowing water, pouring out from under a great mound of melting snow.

I had always had a hard time imagining how water from mountain streams could be among the sources of a major river.  Yet at that moment, the feeling of vitality flowing out from the mountain snow was unmistakable.  Further up the trail, we got a real taste of mountain culture.  At our cozy lodgings, we met people from all over Japan, drawn to Kamikochi by a common love of hiking and mountaineering. 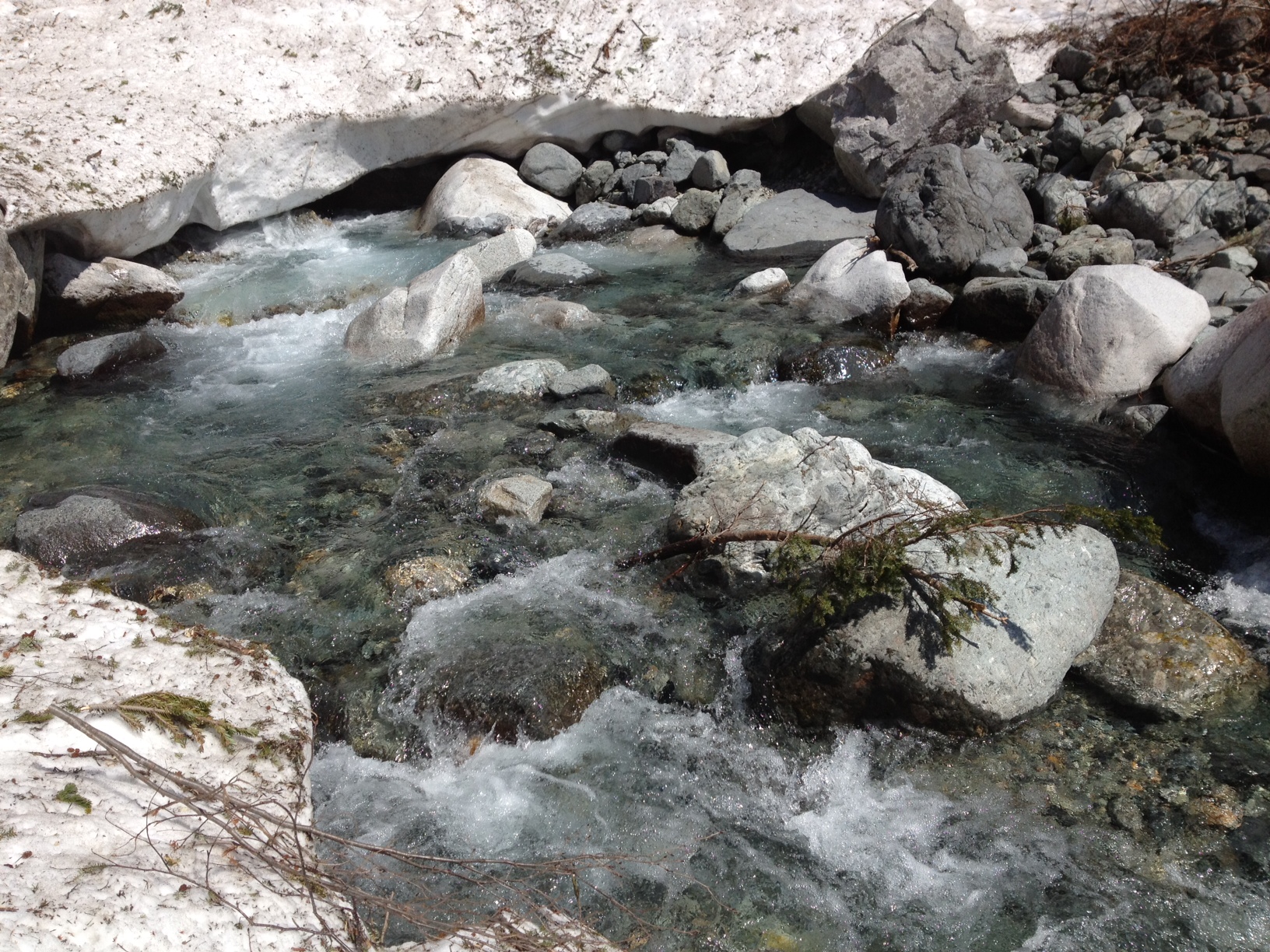 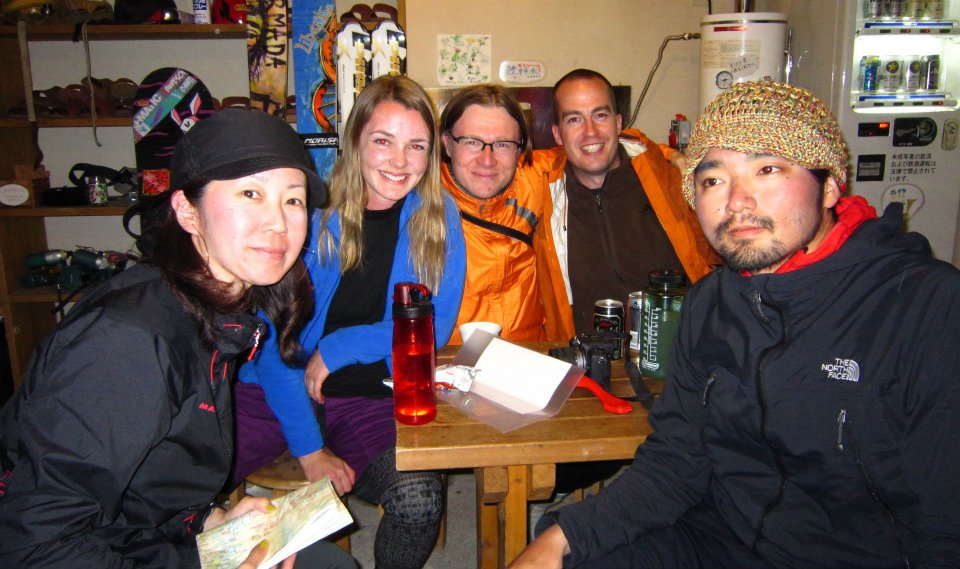 I was reminded that the Japanese word “goryu” (合流) , or “meeting of currents” can be applied to many things: converging river currents, converging traffic, and also a coming together of people from various places.  So I could see a continuity in what I had read and experienced in the past week.  The Azumi people came to the Matsumoto Basin seeking a new homeland.  The particpants in the Mizu Walk, many of them likely descendants of the Azumi, came for a bracing hike along the river.  And always, hikers and climbers from around the world seek out a refuge from modern life in a revitalizing natural setting.  Now, as in the past, nature can unite people with common purposes creating vibrant traditions.

The river water from the mountains continues to shape communities, nourishing people and soil alike.  And even in modern industrial Japan, with all of its urban sprawl and technological innovation, nature and culture are never quite separate.  Natural and cultural history intermingle and flow as one in a stream connecting past and present.  And for those of use who appreciate the natural landmarks that give our communities their shape and character, there is much to be learned from returning to the source.

The Azusa River is one of many features of Kamikochi’s landscape to be discovered this spring.  Come explore with us!

Sakamoto Hiroshi’s book, “Pursuing the Mystery of the Azumino People: Where did they come from and where did they disappear to?” (Japanese)