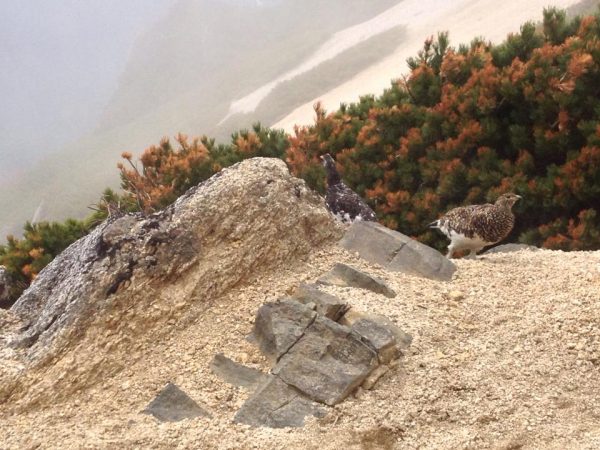 Male and female Rock Ptarmigan, or “raichou” (L and R, respectively), near the peak of Tsubakurodake.

Last week we looked at some key events in the history of Hida Mountain range–AKA, The Northern Japan Alps–as well as alpine culture in Japan. This week, we’ll be surveying the geography of the region defined by those mountains and contained within the Chubu Sangaku National Park.

A note to our readers: We had previously announced that today’s installment of the guide would cover both major peaks and popular hiking routes. Owing to the length of this segment, however, we have split in into two parts with the second to follow next week. In the meantime, please consult this comprehensive guide to mountain walking around Kamikochi. 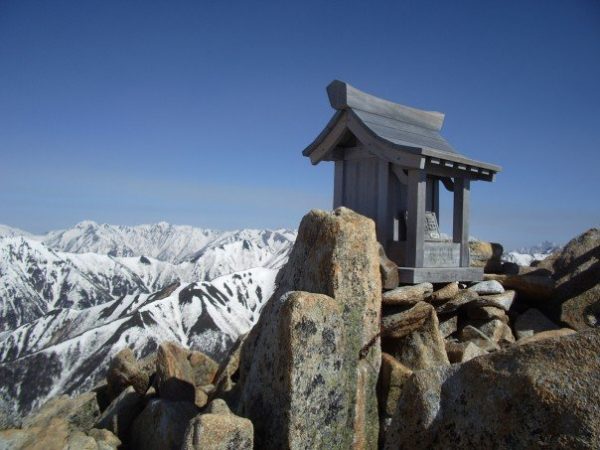 The Geography of the Northern Alps:

The mountains of the Northern Alps lie primarily in Nagano, Gifu, and Toyama Prefectures, with the northern extreme nudging slightly into Niigata Prefecture. The southern peaks stretch northward from the Gifu/Nagano border and fork into two distinctive segments in Northern Toyama and Nagano: the Tateyama Range located entirely in Toyama and the Ushiro Tateyama which branches into Nagano.

This may all seem abstract in written form, so we recommend consulting this detailed map.

Essentially, the major peaks form a Y-shape, beginning with Norikura in the southern extreme of the Chubu Sangaku National Park. Let’s look at some of those peaks in a geographical context.

The following are some of the best known peaks in the Northern Alps. Please note that the level of skill and endurance needed to climb them varies greatly from one mountain to another. 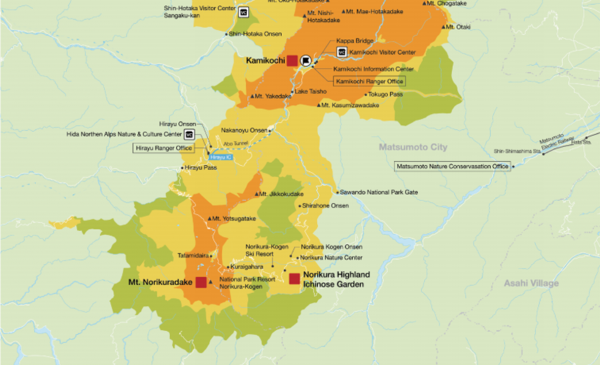 Norikura (3,036m): Located south of Kamikochi and bordering Nagano and Gifu prefectures, Norikura is a prominent feature in the landscape of the southern Hida Mountains. Despite being over 3,000 meters above sea level, the peak can be reached with relative ease from the Tatamidaira Parking lot, making it a good option for less confident hikers in search of a day in the mountains. The surrounding area includes such attractions as the famed Shirahone Onsen. Read all about the region here. 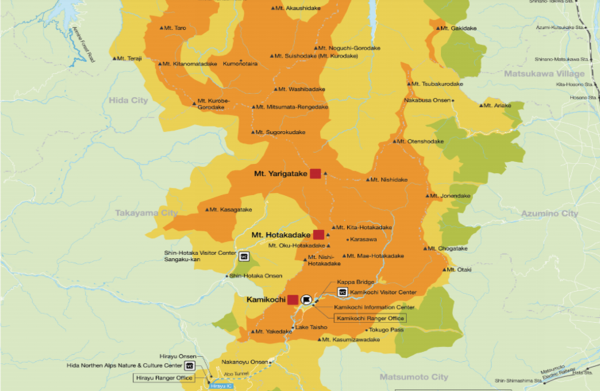 Hotakadake (3,190m) consists of several peaks which define the rugged mountain backdrop of Kamikochi. Of these, the most famous is Okuhotakadake, which is also Japan’s third highest peak. The peak of Okuhotaka may be reached via a 2-3 day trek which passes through Kamikochi and the Karasawa Col. 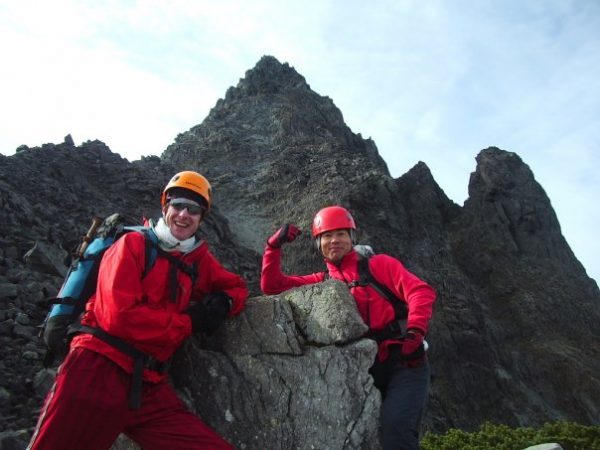 Beneath the summit of Yarigatake (photo: Brian O’Donovan).

Yarigatake (3,180m) is the fifth highest peak in Japan and among the most iconic. It takes its name (literally, “Spear Mountain”)  from the upper portion of the mountain which tapers dramatically into a sharp peak, sometimes compared to the Matterhorn. Yari can be reached via a multi-day hike from Kamikochi and features in two celebrated alpine excursions: the six day trek from Murodo to Kamikochi and the four day “Omote Ginza” trek from Nakabusa Onsen to Kamikochi. One thing to be aware of when climbing Yari is that some routes include the dreaded Daikiretto, a long and dangerously exposed knife-edge traverse where a fall would mean certain death. It is possible to avoid this area entirely, however.

Shiroumadake (2,932m) is the northernmost of the major peaks in the Ushiro Tateyama chain, which branches northeast into Nagano Prefecture. At time of writing, this popular mountain can be reached by donning crampons and hiking up the Daisekkei Glacier, where snow remains even in the dog days of August. There are also hikes that link this area to Karamatsudake and Goryudake to the south. 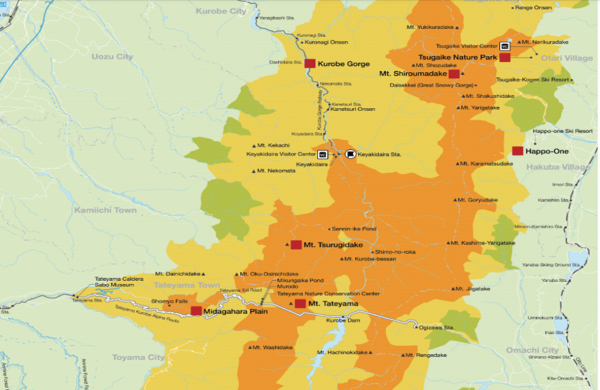 Tsurugidake (2,999m) and Tateyama (3,015m): are the big two of the Tateyama Range. The more forbidding Tsurugidake rivals Yarigatake as an iconic peak of the Northern Alps and probably surpasses it in terms of technical difficulty. Getting to Tsurugi’s summit requires scaling almost vertical sections of craggy slope with the assistance of chains and ladders. By contrast, Tateyama is a much gentler hike best known for being one of Japan’s Three Holy Mountains. Many people access these peaks via the Tateyama Kurobe Alpen Route. 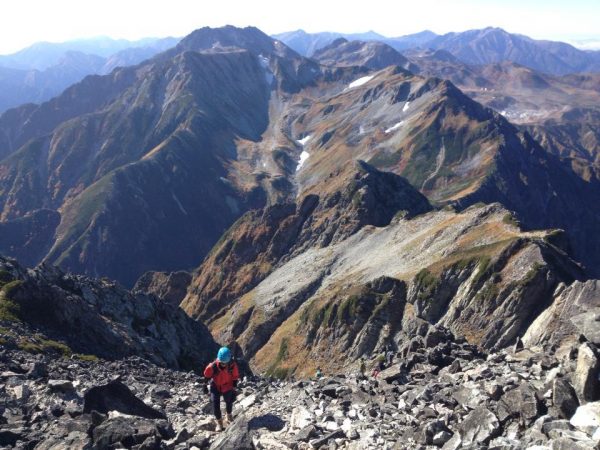 Tateyama as seen from near the peak of Tsurugidake.

Honorary Mention: Tsubakurodake (2,763m) is a mountain of lesser stature, but deserves attention both as an attractive destination in its own right and as the northernmost peak of the popular Omote Ginza trek. You can read about that trek and others involving Tsubakuro here. If undertaken as a limited hike to the peak, Tsubakuro rewards visitors with spectacular views of the surrounding mountains, a unique landscape of granite rock formations, and more raichou than you can shake a stick at (shaking sticks or similar implements at raichou is strictly forbidden). 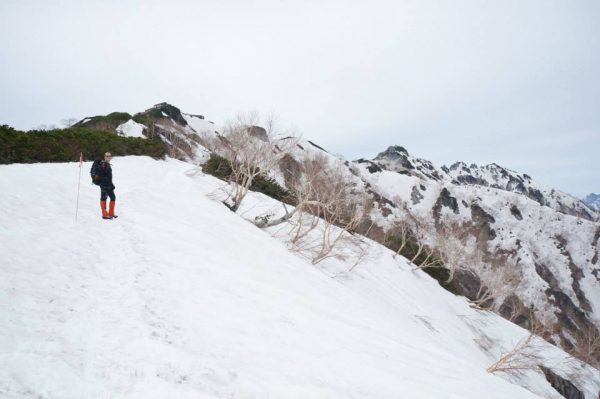 The author en route to the peak of Tsubakurodake, June of 2013. (photo: TC)

The best way to understand these two overlapping but distinctive terms is to think of the Hida Mountains/Northern Japan Alps as the defining feature of a larger area. In other words, all of the Northern Alps are in the National Park, but they do not make up the entire park. Read more about the park here.

We hope you enjoyed the second installment of our Beginner’s Guide to the Northern Alps. Join us here again next week for the third installment.

–A site devoted to the southern region of the Chubu Sangaku National Park and a great resource for prospective visitors to the area: https://alpinewonderland.com/

–Azumino City’s detailed online guide to hikes in and around the Omote Ginza route: https://www.azumino-e-tabi.net/hike/courses/courses_b.html

–A detailed map of the Chubu Sangaku National Park, with all of its key features created by Japan’s Ministry of the Enviroment: https://www.env.go.jp/park/common/data/17_chubu_map_e.pdf