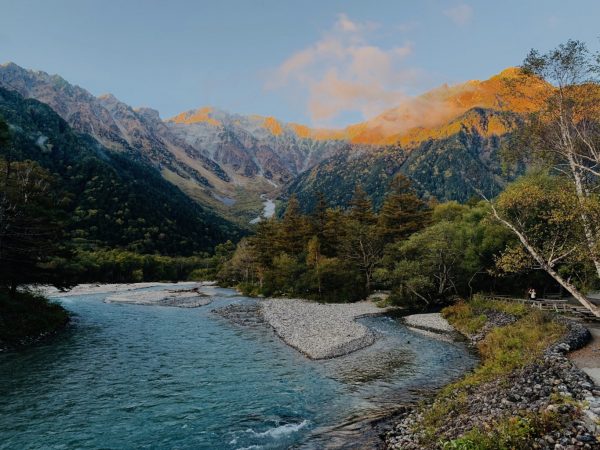 “Here, in the afterglow…”: the evening sun or abendrot brings out the orange foliage on the mountaintops.

Typhoon 19 has come and gone. For Kamikochi, the negative effects were limited to high winds and rain along with a temporary suspension of train and bus services last Saturday. With those suspensions having been lifted early Sunday morning, transport facilities in the Matsumoto/Kamikochi area are back to operating almost as usual.

Unfortunately, some of the train and bus services linking Matsumoto to other uban centers have been disrupted due to landslide activity that followed the typhoon. We posted a news update on this very topic yesterday. Please note that, at time of writing, the JR Chuou Main Line linking Tokyo, Nagoya, and Matsumoto remains out of service.

We hope to have more positive updates on the buses and trains as new reports emerge later this week.

My own experiences with Typhoon 19  came to a head on Saturday evening when flood conditions in my neighborhood led me to evacuate my home in Chikuma City. After a few hours of surveying the situation every ten minutes, I was alarmed to see that a nearby drainage ditch had overflowed and the rapidly swelling water was threatening to engulf my yard. With due haste, I proceeded to nearby Hanyuu Middle School which had been designated as an evacuation site.

I had to wade through thigh-deep water to reach the school. Then, having arrived at the main building where people had gathered, I looked back to notice that my elderly neighbor’s light was still on. I would have to check on her.  I got to her place safely and tried to impress upon her the importance of getting to a safe place. She was unmoved by my pleas, however, assuring me that she had lived a full life and didn’t fear the Reaper.

On the way back to the school, I found the water had risen further and I needed to pull myself along a chain link fence to resist the current. My strategy of tying plastic bags around my feet proved worse than useless, so by the time I finally reached the school again my boots and socks were completely drenched. The school’s playing field an the entire area around my house had been swamped and resembled a small lake. I looked down at the scene with my poor car now up to its bumper in muddy water. Dispirited, I retired to the school’s home economics lab and had a lie down with a stack of hand towels to serve as my pillow. I awoke at 2:30am and finally went home after noticing the water had mostly drained.

My neighbor survived the incident unscathed and so, happily, did my car.

I was lucky as central Chikuma City was spared the more serious flood conditions that affected nearby Ueda and Shinonoi, where many homes wound up several meters under water. Let’s spare a thought for those left temporarily homeless by Typhoon 19 and offer hope that they get back on their feet soon.

Amid all the chaos of Japan’s latest disaster, one heartwarming story came out of the circumstances in Kamaishi, Iwate Prefecture. where the Canadian Rugby Team made use of the downtime caused by a match cancellation to help with the aid efforts. While not exactly conquerors on the field of play, members of the team won the hearts of locals by cleaning up sludge and helping to shift water damaged tatami mats from homes.  Top job, lads. You make me proud to be Canadian.