Home > Journey Journal > Advisory > Safety > What Do We Need for a Safe Trip to the Mountains? 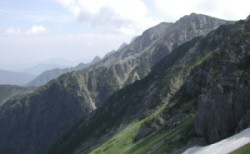 Before you head out to climb Mt. Yarigatake the Japanese Matterhorn, the picture-perfect peaks of Mt. Hotaka-dake, or Mt. Yakedake the mysterious volcano which fumes in the background, ask yourself one question. “Am I fully prepared for all the things I’m planning to do?” I’m sure many of you can honestly answer yes without hesitation, but I’m sure there are some of you who can’t say the same.

“So, what do I need?” you may ask. Well, depending on what you plan to be doing, answers vary. Of course you need gear, but more importantly you need knowledge.

Proper Knowledge is the Key to Safety

If you take the time to look at hiking- and mountaineering-related accidents, you’ll find that most are caused by a lack of proper knowledge of the area and judgement of conditions. Some accidents are unpreventable, but the vast majority can be easily prevented by going into the mountains prepared. Sound like some boring class from high school? Well, sometimes there is a need to study and do a little research. It’s not rocket science. There are really just a few simple things to think about and remember.

How fit are you? What can you reasonably do in a day and what is pushing the limits? Do you have any illnesses that would affect you during extreme exercise or in extreme conditions? You should already know the answers to these questions. 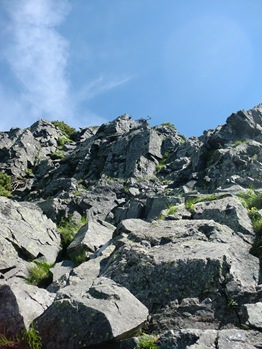 Know the Place You Are Going

I’m not saying you should be able to give guided tours of the place, just take some time to read some pamphlets, books, and maps of the area. Our website offers a lot of information to help in your journey. Also, plan your route. If you were hiking some peaks up at 3000 m and suddenly the clouds dropped down reducing visibility to less than 10 meters, would you be able to make it to a mountain hut or campground? Carry a compass and a decent map and get familiar with their use. It’s really not that difficult.

Don’t forget to be aware of the possible dangers a place poses. Often, but not always, these are brought about by weather and seasonal changes. With bad luck, falling rocks, avalanches, and landslides can destroy even a trained party, so caution is necessary.

One thing that you should be aware of about Kamikōchi is that the treeline continues up to about 2500 meters. While from the basin everything looks green, going above the treeline will take you into a craggy world of rocks and cliffs. Another is that climbing up on the craggy peaks and traverses can be extremely dangerous depending on conditions. Two courses of note are the paths between Mt. Oku-Hotaka-dake and Mt. Yarigatake (also known as the Dai-Kiretto) and the ridgeline between Mt. Oku-Hotaka-dake and Mt. Nishi-Hotaka-dake. These paths can be dangerous even in good weather and should be treaded carefully. In times of wind, rain, and snow, be extra careful. Every year there are quite a few people who lose their lives by falling from these courses and others. 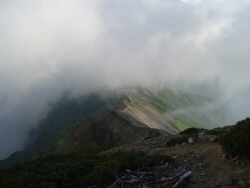 Don’t forget to check the weather forecast before you leave. And remember not to underestimate weather in the mountains. The altitude difference brings with it a drop in temperature, but aside from that, mountain weather is extremely variable and often times different from the closest city weather report. Weather in Matsumoto, Takayama, and Kamikōchi is a world apart.

Checking before you get to Kamikōchi is a good idea, but after you arrive in Kamikōchi and before you go off climbing, be sure to check again. Note that weather reports are not definitive. Especially high in the mountains, the weather is anything but predictable. Often times the weather reports are incorrect, so be sure to factor this into your plans.

In addition, foreign tourists not used to the weather in central Japan often find themselves in trouble in Kamikōchi. Why? Well, here it is much wetter than other countries. The rain can be intense and continue for days, moreso in Kamikōchi than in the surrounding cities. Getting wet and hit by the wind, especially higher up, it is quite easy to find yourself on the verge of hypothermia.

Time in the mountains is really important. As a general rule, start early, finish early. With an early morning start you can generally make it to your destination by noon or early afternoon giving you time to relax, set up your tent, cook dinner, take pictures, or go for a little scenic hike. In the mountains, and especially the Japan Alps, weather changes quickly. Often times the weather changes dramatically in the afternoon with lightning and clouds pulling in. You don’t want to be struggling to your destination in this kind of weather.

It is not only this, though. It is Japanese custom to arrive early at mountain huts, go to sleep early, wake up early, and leave early. Japanese people know this and usually respect this ‘rule’, but often times foreign visitors do not. While it may not be written in English (or written at all for that matter), showing up after dark, or even after the lights have already gone out, is considered extremely rude to the Japanese. Yes, I understand how this can be annoying at times (and that the times seem way too early), but that’s the way things run in the Japanese mountaineering world — and Kamikōchi is no different. As a visitor, you should try to accustom yourself.

A Little in the Way of Aid and Prevention

There is one simple thing you can do to help yourself before you find yourself in trouble. That is filling out a mountain climbing card and putting it in the box at the start of the trailhead. Should you not turn up where and when you are supposed to, rangers and other rescue staff will know where to look for you should the need arise.

A Person’s Gear Tells Their Personality

When you are preparing for a trip, what is the first thing you think of? For most people, it’s gear. Take a look around at your fellow hikers and check out their gear. Gear can tell you a lot about a person. Is the person tidy or a bit sloppy? Does he actually use his gear or is it just there to look cool? Is he over-prepared, under-prepared, or have just the right stuff? These things aren’t definitive, but gear doesn’t lie. A person’s gear tells their personality. At least I believe so…

Although Japan is an extremely unique country, amongst themselves, Japanese people are often quite similar. Rather than trying to stand out, they prefer to fit in. Not necessarily good or bad, it’s just that most people and things in Japan seem to follow this trend. Being the safest country I have ever been to (sometimes too safe if there is such a thing), Japanese people as a whole seem to like preparing and can really relate with the old saying,“Better safe than sorry.”

While often over-prepared, Japanese hikers usually turn up with all the right gear they need, just over-outfitted and overburdened. Foreign hikers, on the other hand, really do come in all types, ranging from those as safety-conscious as the Japanese to others who think everything will be alright. Honestly, I can say that I’m somewhere in the middle to latter end, though I’m making efforts to be a little more safe in my adventures. Anyway, it’s this latter type of person that can often be seen running into trouble when things don’t quite go as planned.

So, What Kind of Gear Do We Actually Need?

Aside from your clothing, here’s a simple list of necessary gear for your trip. Note that this list is not complete, rather it’s a good start.

There are several sports stores in Matsumoto City that sell mountain-related gear. Two of the easiest to get to are ICI Sports in downtown Matsumoto and, a bit further from the city center, Kamoshika Sports.

Putting It All Together

The easiest and most important thing to take along with you to the mountains is a good and healthy attitude. You should understand and respect the places you go to as well as the life there. Also, think about what you are doing, where and why you are doing it, and who you are doing it with. In Kamikōchi, take the time to learn and respect the rules and manners. Timeliness is of prime importance. In addition, don’t forget that Kamikōchi is located in a national park, so you should respect the plants, wildlife, and other aspects of nature. While although simple, this mindset is invaluable. If you remember this and collect the knowledge and gear you need, then you are on your way to making your trip a safe one.

I hope armed with this information, you can come to Kamikōchi prepared and have a great time, no matter what the situation.