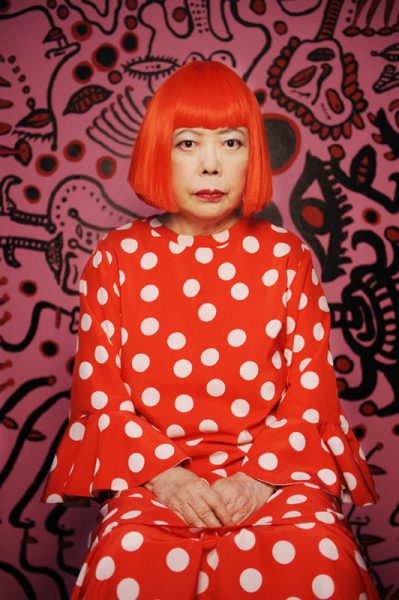 The artist in her element.

While walking the streets of Matsumoto, you may find your gaze drawn by a massive, riotously colorful floral statue outside the city’s main art gallery. Monumental in scale and oddly fierce in demeanor, the piece at once draws visitors in and threatens to devour them. It is both otherworldly and entirely typical of Matsumoto’s own Kusama Yayoi, an artist whose singular vision has captured the hearts of art lovers all around the world.

To those who live in and around the city, Kusama is a figure of both local and cosmic significance. To the global art community, she is an international treasure, a fact attested to by the announcement in 2014 that Kusama was the world’s most popular visual artist in terms of gallery attendance. One such exhibit can easily be worked in to a visit to the Matsumoto area and is well worth a look.

Biographical sketches of Kusama often begin by mentioning that she was a fish out of water in post-war Japan, at odds with the traditions and attitudes that surrounded her. More tellingly, it was in childhood that Kusama began bringing her distinctive style to life, making designs which were inspired by the hallucinations she experienced during her formative years. The condition which affected her in childhood would continue to influence her art into her ninth decade, and at age eighty-seven, she remains active while voluntarily residing at a psychiatric institution.

The story of Kusama’s career forms a saga of sorts, given both the breadth of her achievement and the long period for which she has been active. Her career began to take off with her arrival in New York in 1957 following a long correspondence with Georgia O’Keefe. In early exhibitions, she established herself as a presence on the scene with her innovative use of elements such as mirrors and electric lights. In the late 1960s, she would become a key figure of the emerging counterculture, staging happenings in which nude body painting (often featuring her signature polka dots) was a featured practice. 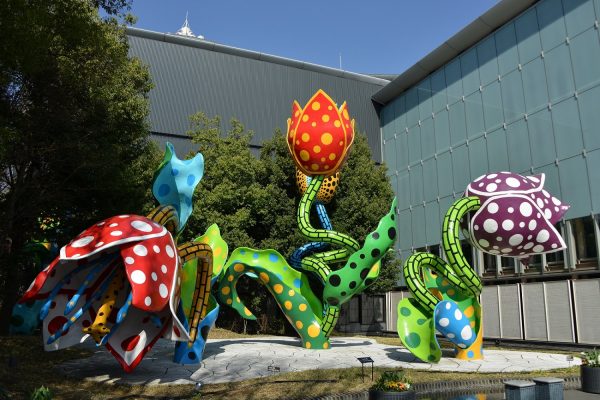 In one respect, Kusama’s style was very much in synch with the free and transgressive spirit of the 60s, with her psychedelia, anti-war protests, and nudism dovetailing with current trends. And yet there was a clear outsider streak that marked her as more extreme than the scene which had taken form around her. And as the counterculture of the 60s began to fade into the more sedate and introspective 70s, Kusama continued to evolve and develop as one of the great psychedelic survivors of the era, sending the forgotten promise of a new cultural dawn into interstellar overdrive in her own work.

In the years that followed, Kusama returned to Japan in 1973 and began to create large open air installations which can now be seen all over the world. Along the way, she also found time to write novels and create award winning films. The artistic practices which had begun as a means of battling mental illness had grown into a vast and multifaceted lifetime project which continues to grow to this day. 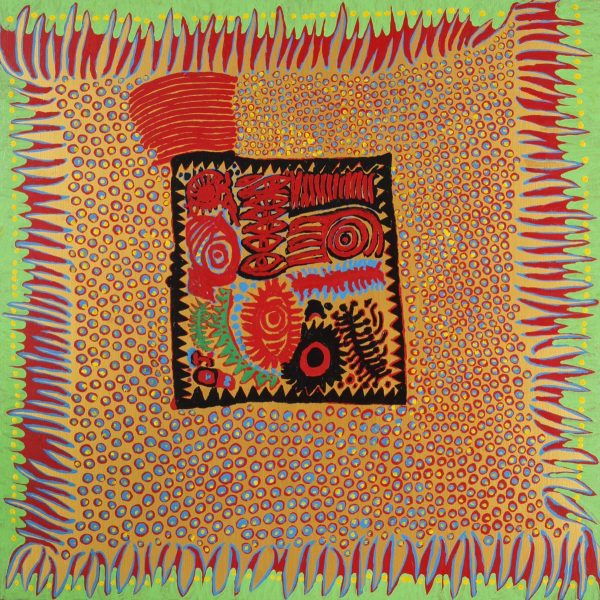 All of this provides some useful context to works which are, at first glance, overpowering and bewildering. Even so, bewilderment is a key factor in appreciating Kusama’s work. Her installations often cover every inch of an enclosed area making their sensory assault a truly immersive experience—one from which the viewer momentarily cannot be separate. The 18th century aesthetic philosopher Edmund Burke posited that the human experience of the “sublime” in beautiful works of art had to do with the recognition of one’s own finitude when confronted by something truly grand. What Kusama’s work offers, however, is more elusive and unsettling. In describing her idea of self-obliteration, the artist offered the following anecdote in a 2012 interview:
“One day I was looking at the red flower patterns of the tablecloth on a table, and when I looked up I saw the same pattern covering the ceiling, the windows and the walls, and finally all over the room, my body and the universe. I felt as if I had begun to self-obliterate, to revolve in the infinity of endless time and the absoluteness of space, and be reduced to nothingness. As I realized it was actually happening and not just in my imagination, I was frightened. I knew I had to run away lest I should be deprived of my life by the spell of the red flowers.” 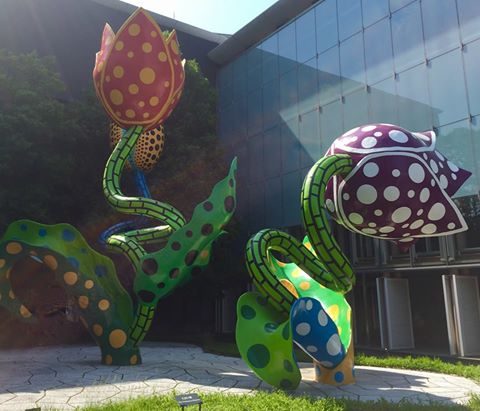 Anyone who has even a passing familiarity with Kusama’s art will recognize the flower motif seen in many of her more famous pieces, but few would guess that the genesis of this theme had been so terrifying. From a jarring experience that seemed to threaten Kusama’s very existence came inspiration for artworks which could likewise dazzle and transport generations of art lovers and artists alike. By the same token, any attempts to describe the Kusama experience in simple terms seem tragically quaint given the powerful, experiential nature of the works themselves. Those two dimensional images that come up in a Google search don’t do any justice to such works; they simply must be experienced firsthand.

In terms of what you can expect at the actual exhibit, many of Kusama’s trademark styles are on display with a hallway of mirrors creating an illusion of infinity and electric lights used to great effect in various places. Her well-loved pumpkin sculptures can also be seen along with many other works from various periods in her career. The gallery’s gift shop, located on the ground floor, has a number of items of Kusama-themed memorabilia to choose from, including art books, post cards, statuettes, and (my personal favorite) a pumpkin tenugui. It may seem a little crass to be hawking souvenirs as part of an article on Kusama’s art, but such trinkets do make nice gifts for the Kusama fancier in your life as well as providing added revenue for the gallery.

UPDATE: As of the winter of 2020, works from Kusama’s 2018 exhibition, A Place for my Soul, have been incorporated into the museum’s permanent collection, greatly increasing the number of works on display.

Much as I might struggle to wrap this discussion up in a merciful 1000 words, I genuinely feel that the Kusama collection at the Matsumoto art gallery is a must see for any visitor to the area. Our city is mainly known for two things: a wonderful and largely extant medieval castle and proximity to the natural wonder of Kamikochi. With the latter drifting off to a winter sleep for half the year, it behooves us to turn our eyes to local culture, including in this case mind-bending works from one of the world’s most beloved artists. Kusama Yayoi’s art has the power to move even the most casual viewer, but it needs to be experienced directly to work its magic. We urge you to take that opportunity while you’re in town.

–Open for the duration of August.