After over 170 mm of rain fell within a 24-hour period, on June 23rd, transportation, electricity, and phone lines to Kamikōchi were cut off. The torrential rain caused a major landslide on the road to Kamikōchi, stranding approximately 630 tourists. The following day, with workers partially clearing up the roads, these tourists were escorted out of Kamikōchi. On the 25th, electricity and phone lines were restored to working condition. And although on the 26th, roads were finally restored enough to allow the stranded buses, taxis, and other vehicles to leave, roads in and out of Kamikōchi for regular traffic are scheduled to be reopened by the 29th.

For some this kind of experience might be frightening, but for me, I am fascinated by it. Let me explain… 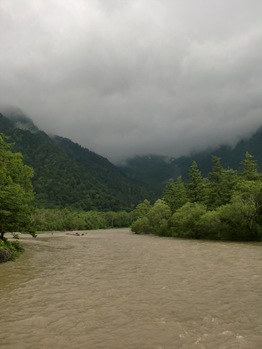 Take a look at the muddy Azusa-gawa River above. This is not something strange, rather it is a normal and natural phenomenon. 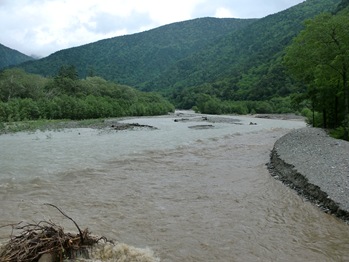 Here, the water of the Azusa-gawa River is divided between the normal clear blue water and the muddy water washed down from the mountains. 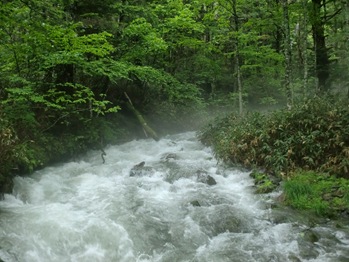 This normally peaceful stream is roaring with the excess rainwater brought by the storm. What a beautiful and mysterious time to see it, especially with the mist/fog rising. 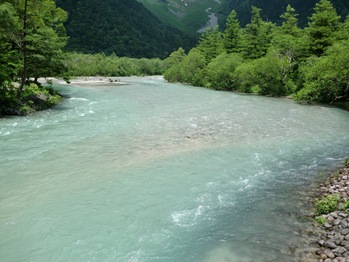 And after the storm, we can finally see the Azusa-gawa River returning to its normal blue. After seeing it all muddy, we can appreciate its true color even more. 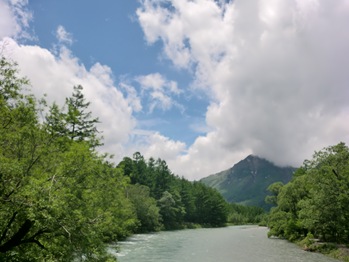 And with the end of the rain comes the blue sky. What a great end to one of nature’s interesting sides.

Now, you might still be wondering why I am so fascinated about this somewhat ‘bad’ event of nature. Well, these pictures all take me back to the time I was backpacking in the western part of Sichuan Province of China several years ago. STORY TIME START!

With roads in most every direction being washed out by monsoon rains, I unfortunately had no choice but to cancel my hiking in the area and return by bus to where I came from. No sooner did my bus get a quarter of the way to its destination as it stopped in a line of other buses. Great… Now, understand that long bus waits of up to 12 hours on mountain roads in rural China are nothing strange. Anyway, I waited three hours on the bus and finally decided to get a better look at the action. That’s when I saw several trucks and buses stuck in a 1-meter deep landslide several hundred meters ahead. After watching local villagers dig for an hour or so while endless amounts of mud continued to flow down, I decided that grabbing my pack and hiking down to the next village, roughly 18 km down the road, was the right choice for me. And, oh yes, was I right…

To make an extremely long story short (because it really will be), the trek consisted of climbing 50+ degree slopes to cross 3-meter deep flooded roads, crossing several landslides, and making way through a 600-meter long expanse of river which was two days before the concrete road I traveled by. With the sudden onset of more monsoon rain, rising water levels (30cm in 10 seconds) got my adrenaline pumping enough to climb 2-meter high walls of concrete road and wade through 1-meter deep sections of high-flowing river in a hurry.

Wow… I’m getting excited now. Sound crazy? Dangerous? I suppose I have to agree, but it was a great experience, something that most people will never experience. To this day, I really have not been able to imagine the sheer magnitude of the disaster. Nature is truly amazing… Maybe this is the reason I am fascinated by such things. Whatever the true reason, this will remain with me forever. Now, reminiscing makes me crave for another such experience. Can I say, without being labeled as crazy, that I’m almost envious of those who were in Kamikōchi this past week?