The rain has only let up for a few days out of the past week and a half, and it looks like this next week will also bring its fair share of rain as well, albeit with a slight bit more sun. As evidence to this rain, water levels of the Azusagawa River and its branches have risen quite a bit. Although  one might think the rain would toss dirt and silt into the water, the water has remained remarkably clear. To someone who spends every day in Kamikōchi, the slight murkiness of late is noticeable, but to visitors, the clearness of the water still beautifully stands out. 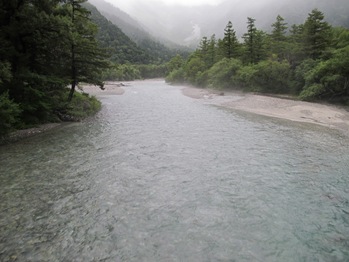 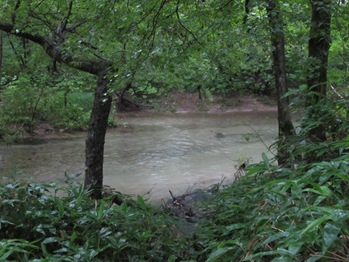 The next picture is of the Shimizu-gawa Stream. Although the rains have caused many of the other waterways of Kamikōchi to rise, the water level of this river is totally unaffected. The water remains as beautifully clear as ever, despite the fact that it was raining when taking this picture. In fact, no matter what kind of rain or the amount that falls, this river never becomes muddy. Thinking about rivers back home, I imagine brown water that you can’t even see your hand in, let alone after heavy rains when those rivers flood all around. This stream is truly a spectacle of Kamikōchi’s environment. 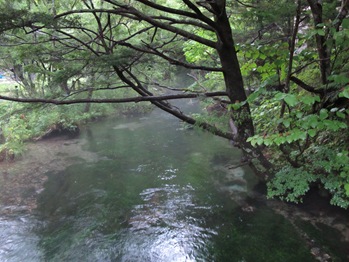 In the following picture is the Nakagawa Stream at Konashi-daira. The water levels in this branch have risen lately, giving the small trout of the area a little more room to swim. What a soothing scene… 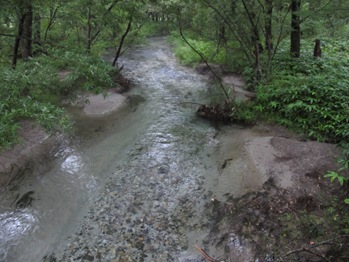 The rains of late have brought with them another kind of beauty that will make any nature lover feel at peace. Why not come and spend a little time relaxing to the soothing scenery and sounds of nature?