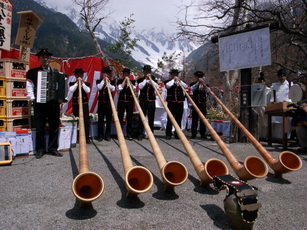 Lederhosen-clad Japanese Alpen horn players? This is a sight you cannot find just anytime and anywhere even in Japan. You have to come to Kamikōchi in April to see the Kaizansai (Mountain Opening Festival). You are in for even more treats: you can see the traditional lion dance and to warm you up in the chilly spring breeze, you can taste sake blessed by the local priests.

Matt Dunn writes about his visit in Kamikōchi this April.

The Kamikōchi Kaizansai is a mountain opening festival which takes place at the end of April every year. At the heart of the festival is a divine ritual where priests invoke the Shintō gods to provide safe passage for the 2 million people who visit Kamikōchi every season. I was invited this year to take part in the festivities and get a feel for what the festival is all about.

Coming out of the tunnel and into the mountain sanctuary of Kamikōchi is a wonderful feeling as you pass from the confines of a regular Japanese mountain valley into the splendour of the Kamikōchi valley, with the broad valley floor surrounded by towering snow covered peaks. There was still a lot of snow on the ground but luckily it was a fairly warm day by spring Kamikōchi standards. 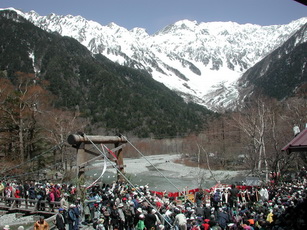 After arriving at the Kamikōchi visitor centre we walked up to the Kappa-bashi, a famous bridge over the Azusa River. In many sense the heart of Kamikōchi, this is where the festival would be held. There were already a couple of hundred people at crowding around the festival arena, on the bridge and on the earthen bank next to the Gosenjaku hotel.

We were greeted by the surprising sight of line of lederhosen clad Alpen horn players serenading us. The horns originate in Switzerland but are just at home here in the mountains of Japan.

Around the edge of the earthen arena casks of sake and gifts of fruit, vegetables, rice and meat were piled up high. These are gifts called shinsen from a variety of beneficiaries who support the festival and wish the gods to look favourably upon them.

As the taiko (Japanese drums) roll with their slow rhythm, the Japanese priests appear with their measured gait. First, comes a Shinto shubatsu purification ritual. The priests chant in monotone, imploring the gods of all things to forgive the mortals of this earth. In Shinto god (or kami) is believed to exist in all things so this particular part of the ceremony is directed towards the mountain gods. Although today the name is written with simpler kanji, Kamikōchi used to be written as “the place where the gods live”.

The priests then wave ritual wands called onusa made of flax streamers over the attendees and the offerings. This symbolises the brushing away of offenses.

After this the mountain gods are implored to bid safe passage to all in the mountains. The chanting and the slow drum roll resonate mystically with the crystal clear Azusa River and the amphitheatre of peaks as a backdrop. Government and business beneficiaries solemnly take branches of the sakaki tree and lay them on the An table – two claps and two bows are the prescribed routine.

The festival then moves to the span of the Kappa-bashi where a barrel of ceremonial sake is split open. No Japanese festival is complete without the splitting of sake followed by its rapid consumption! It is believed that by drinking miki (sake offered to the gods) together with the kami to whom it is offered the celebrants experience a non-everyday state of mind and body, and thus deepen their communion with the kami. More about that later! 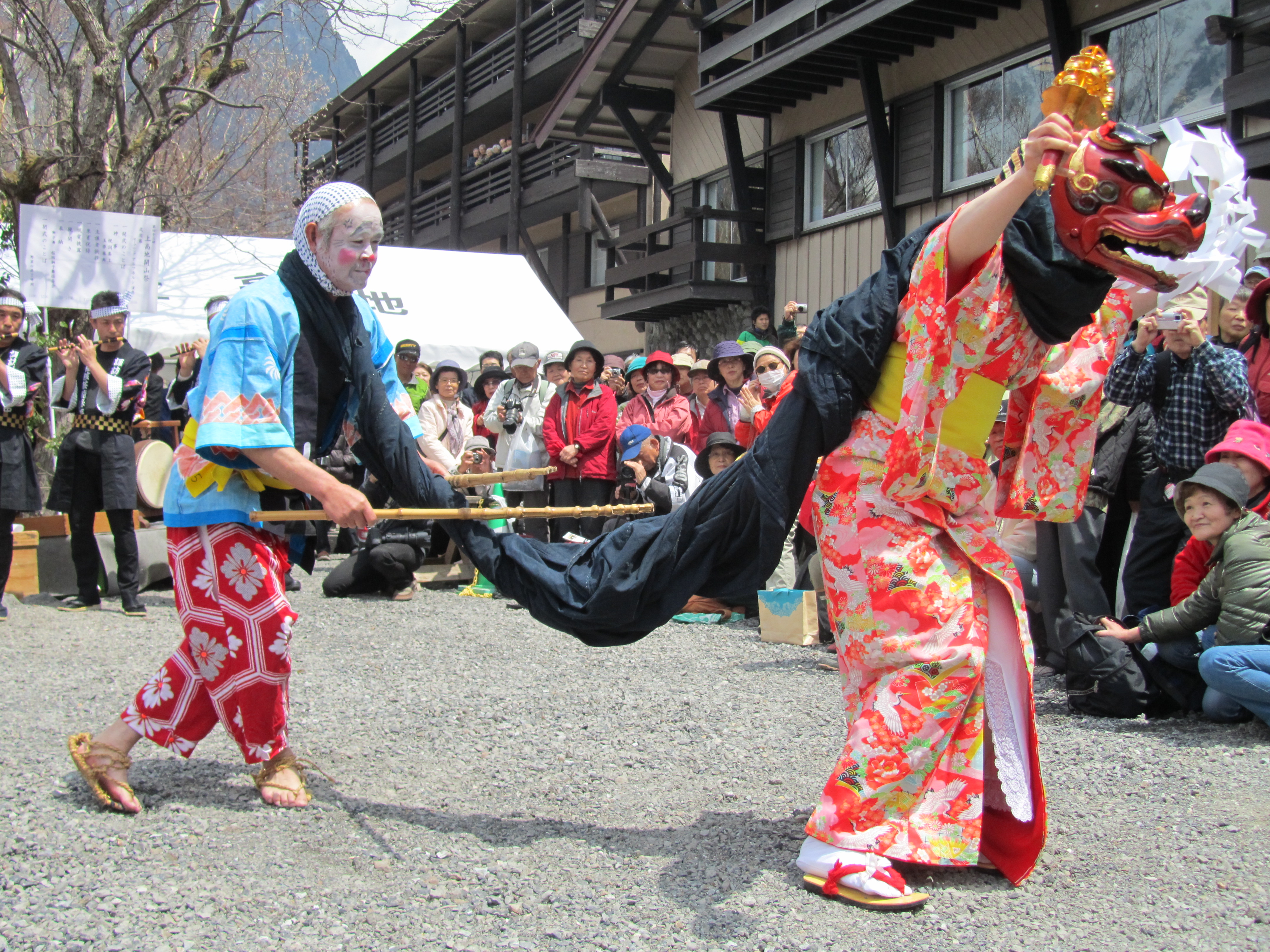 The action moves back to the arena where a traditional shishi-mai (lion dance) begins. Performers dressed in traditional garb play taiko and flute while a lion dances with his clown-like attendant. The lion bobs and weaves whilst he chatters away. The attendant prances with exaggerated movements and hand flourishes. The pair of them pause suddenly at periods throughout the performance in comedic postures to the delight of the crowd.

The shishi-mai dance originally came from mainland Asia in the 8th century and has been used ever since in Shintō ceremonies to ward off evil spirits. Many temples and shrines in Japan will have a pair of lions guarding the entrance to stop the evil spirits from entering the compound. 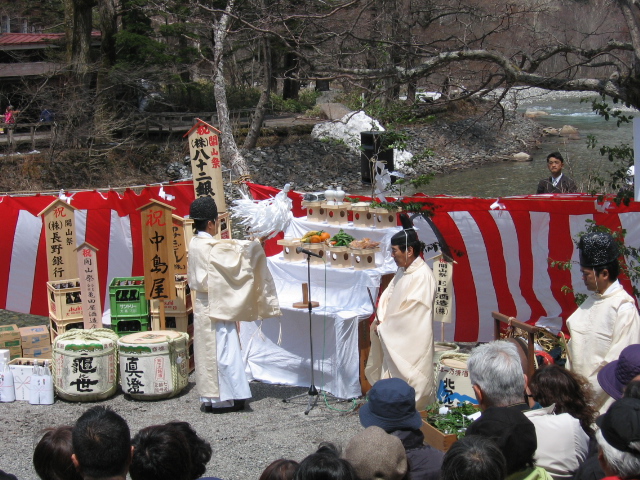 With the main part of the ceremony over, it was now time to enjoy communion with the kami of Kamikōchi!  All the sake blessed by the priests is opened and the festivities conclude with a feast and much drinking of sake. Sake on an empty stomach won’t do, so there is also a hearty meal of yakitori (skewered chicken), yakisoba (fried noodles) and manju (dumplings).

As I sat in the soft rays of the April sun with a warm fuzzy feeling from the sake and a full belly, I gazed at the wall of snow covered peaks and pondered. The local inhabitants had named Kamikōchi as the place where god lives and sitting where I sat I could see why they had given it that name.