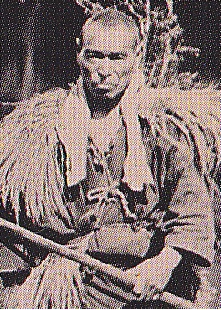 Although Kamikochi is one of the most famous tourist spots in Japan with visitors coming from all over the world, there are still relatively unknown things about Kamikochi.

One of the most interesting and intriguing points of Kamikochi’s history is the story of an aged man who was amazingly able to live alone in the untouched and harsh natural conditions of Kamikochi over 100 years ago. Making a living through fishing and hunting, this man built a hut alongside Myojin-ike Pond.

Earning high praise from the English Missionary Walter Weston (the man who introduced the greatness of Kamikochi to the world), this legend’s name is Kamijo Kamonji.

In the Edo era (1603-1867), there were Japanese woodsmen known as kikori living in Kamikochi. Because Japanese forests have been logged for centuries, they have not been considered natural forests for a long time and thus have required man’s hand in keeping balanced and healthy. This is where kikori played an important role. They performed tree thinning to resolve problems with a lack of sunlight, to control destructive insects, and to foster the growth of healthy trees.

Amongst the groups of kikori, there was a boy called Kamonji who was the cook of one woodsman lodge. The boy had a liking for fishing during his breaks, and the elder kikori understood that he had natural talent for it. Curiosity also got the boy practicing using a hunting rifle. That practice rewarded when he took an antelope by himself at the age of 14. To describe his prowess as a hunter, throughout his lifetime, Kamonji took 80 bears and 500 antelope. Because of his fishing and hunting skills and the fact that he never complained about his cooking duties, the boy’s presence was truly helpful to the woodsman lodge.

The Birth of Kamonji-goya Hut

In 1880, at the age of 32, Kamonji built a hut near Myojin-ike Pond to be his shelter while he was fishing and hunting. This was the birth of Kamonji-goya Hut, the oldest hut in Kamikochi still existing today. Despite the fact that his wife and children lived at foot of Kamikochi in Shima-shima Village, Kamonji spent most of the time with his three dogs staying in the hut he built, only rarely returning to his family. 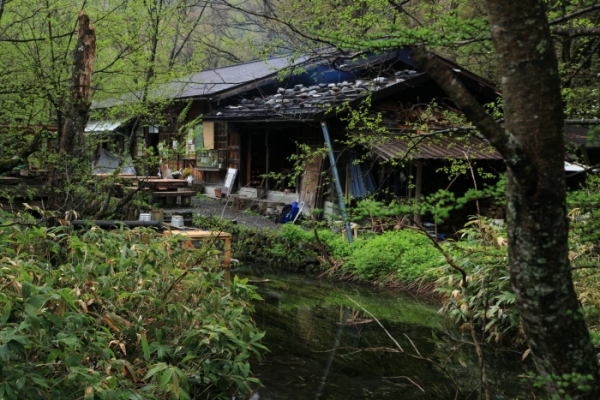 It was around this time that the work of the kikori was called to a stop in Kamikochi due to excessive logging. However, Kamonji chose to continue his lifestyle of fishing and hunting and remained in Kamikochi.

His First Meeting with Walter Weston

During the same period that Kamonji was living in Kamikochi, the English missionary Walter Weston also visited Kamikochi as one stop on his mountain climbing journey around Japan. Despite there being no official record of the time of their first meeting, it is in Kamikochi that the two men most likely first met. We can read an interesting paragraph from Weston’s book “Mountaineering and Exploring in the Japan Alps” (1896):

“From the summit of the pass a rough scramble down the loose broken rocks of a torrent bed took us in an hour and a half to a meadow bordering on the left bank of the Azusagawa, where amidst the trees we found another of the huts belonging to the Noshomusho. The only human being in the lonely valley was an old hunter whom we found by the river-side fishing for the trout in which these mountain streams abound. From him we purchased a dozen fish, varying in weight from half a pound upwards, and when dinner was done, we spread our tent upon the floor, laid down our native straw rain-coats as mattresses, and so passed the night as before” (Mountaineering and Exploring in the Japan Alps, 1896) 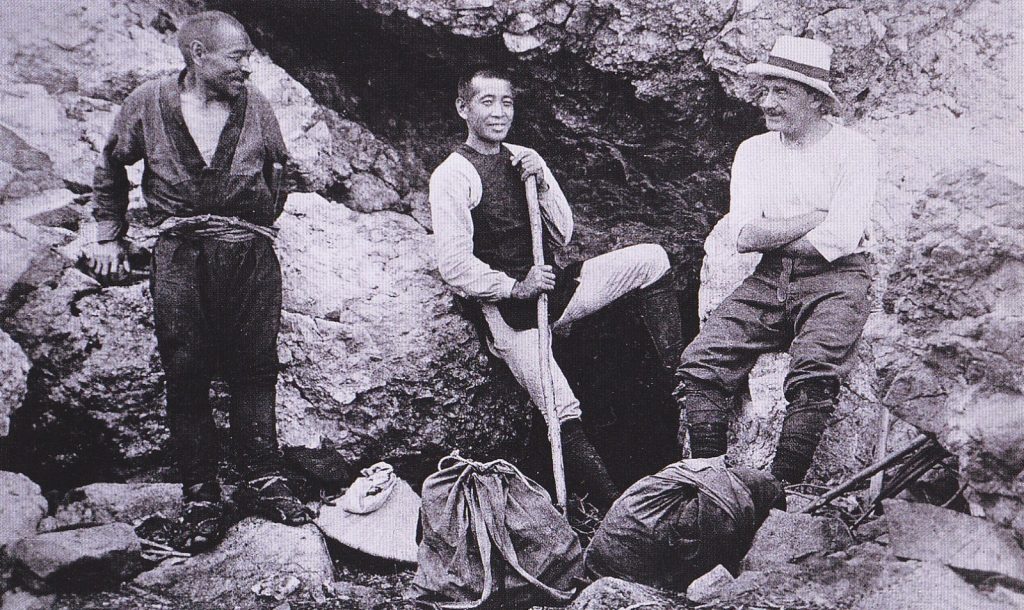 It is generally said that this moment was the very first time they actually met face to face with each other. Weston stated in the book that he began walking from Tokugo-toge Pass (the only entrance to Kamikochi at the time) at 9:30am and arrived in Kamikochi at 5:00pm.  While Weston’s book only mentioned “an old hunter”, it must have been Kamonji as there were no others able to fish until dusk other than those living in Kamikochi, which only Kamonji did.

The Mountain Climbing Records of Weston and Kamonji

Weston and Kamonji reunited two years later when Kamonji was chosen as Weston’s guide for his ascent of Mt. Hotaka-dake. Let’s take a look again at an excerpt from Weston’s book “Mountaineering and Exploring in the Japan Alps” (1896).

“The rocks were steeper and firmer than any we had yet encountered, and the call for our best energies made the work the more exhilarating. By 12:45 we were standing on the sharp arête from which rise the great towers of granite that give the peak its appropriate title- “the mountain of the standing of ears of corn”.

Weston and Kamonji cultivated a unique friendship through this exhilarating climb, and Weston showed his respect to Kamonji by changing the route to visit Kamonji’s hut (Kamonji-goya Hut). On the way to the lodge, however, they had a rather interesting time when Kamonji stepped on a  wasps’ nest by accident.

“At the best of times Kamonji would be ugly, but on this occasion his appearance was uncanny. He began to leap about with the wildest antics, and, for a moment, I feared he had taken leave of his senses.”

After the wasp incident, Weston and Kamonji arrived at Kamonji’s hut. Being built alongside the still Myojin-ike Pond, it was beautiful in the eyes of Weston. Weston commented “Shortly after leaving the scene of the disaster we reached Kamonji’s shanty, picturesquely situated by the still waters of a secluded mere, whose glassy surface mirrors the form of the giant cliffs at whose foot it nestles so securely.” 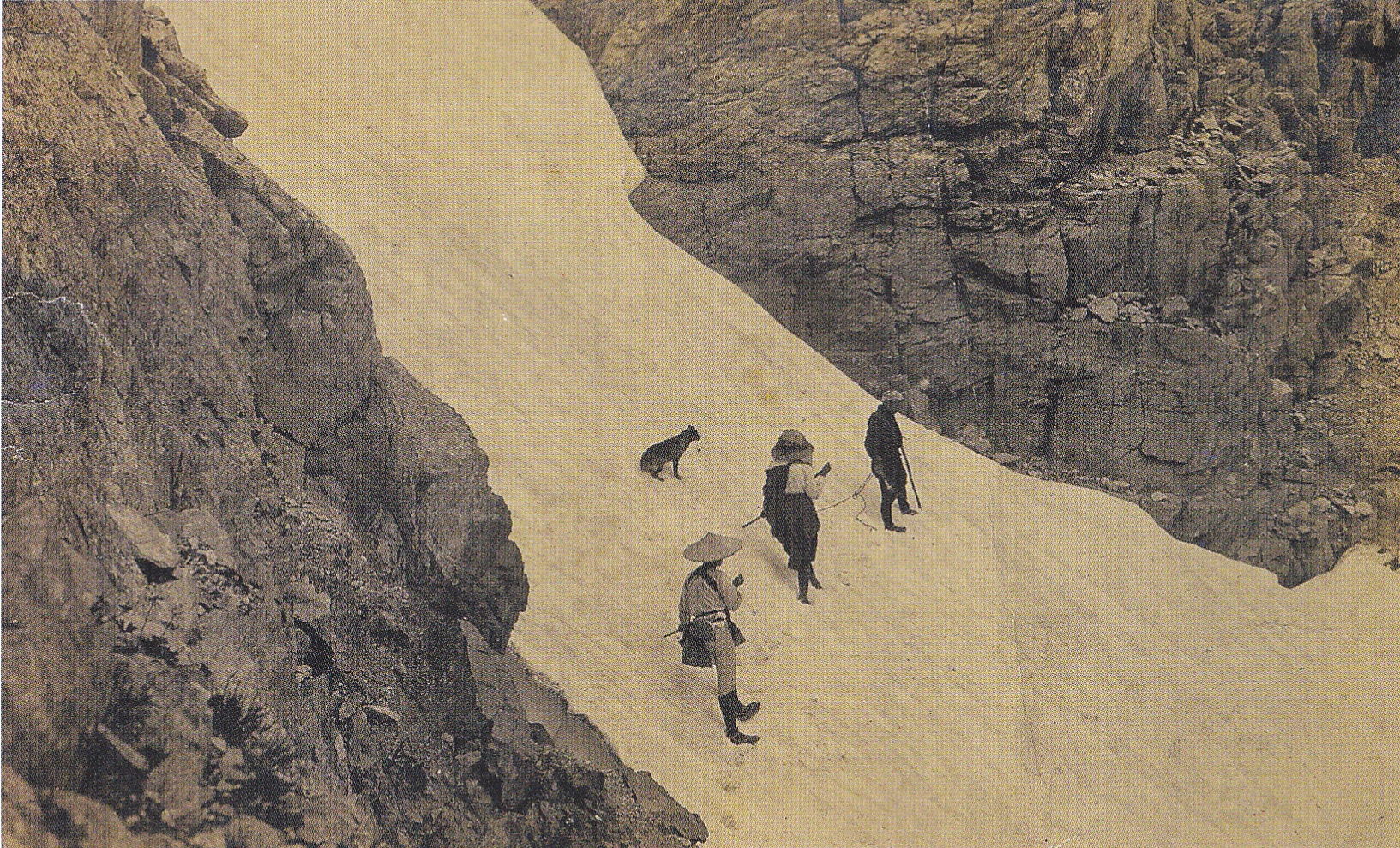 Through their adventure together, Weston acknowledged Kamonji’s potential, and eventually he introduced Kamonji as a professional mountain guide in his book. Not only was Kamonji’s name spread to the world, but also Kamikochi’s.

The Past and Present of Kamonji-goya Hut

It was truly nice to spend a whole day in Kamikochi on my day off. Kamonji-goya Hut is definitely my favorite place in Kamikochi, for me outranking all the other tourist spots. During my stay, I mostly lingered around Kamonji-goya Hut and indulged in the history and culture of Kamikochi. 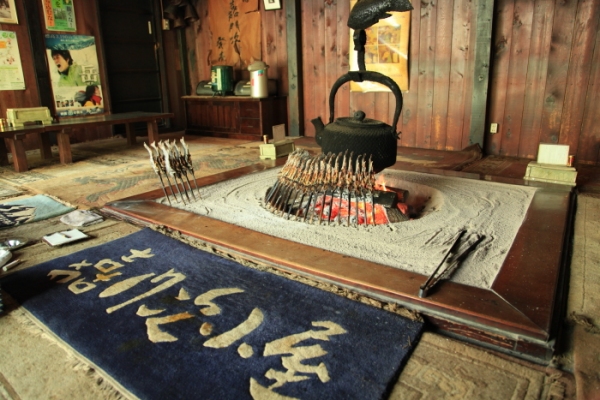 What makes Kamonji-goya Hut so great is that you can not only see the history, but you can feel, smell, and taste it as well. At the hut, you can try some of the trout that Kamonji once caught, grilled over the irori (Japanese traditional fireplace ) he built. And in addition, hung up in the hut is the ice axe that Kamonji received from Weston as proof of their friendship. 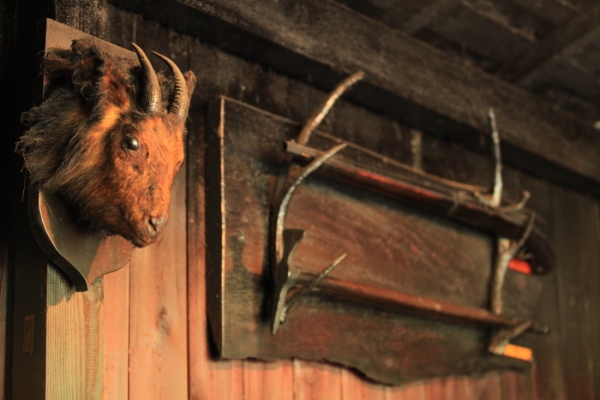 Mr. Tarou Kimura, a well-known guide and the man who who established the National Park Guide (NPG), strongly recommended Kamonji-goya Hut as below:

“Kamonji-goya Hut is the only tourist spot in Japan where you can eat such good trout and experience such history and culture.” 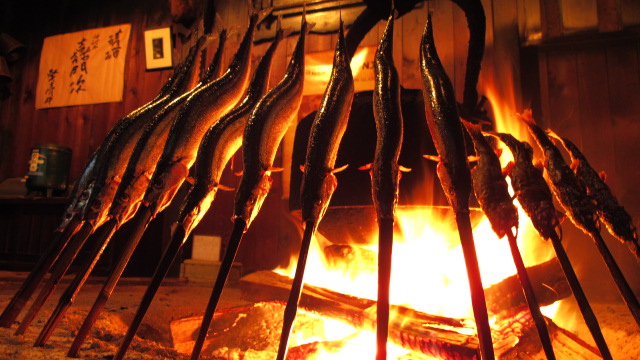 The fourth owner who is a descendant of Kamonji, Mr. Teruo Kamijo, commented the following on an official website:

“Even though this hut has had some expansion work done, it still remains small. Still, I wish all visitors to enjoy Kamonji’s hut’s irori and take with them a great memory.” 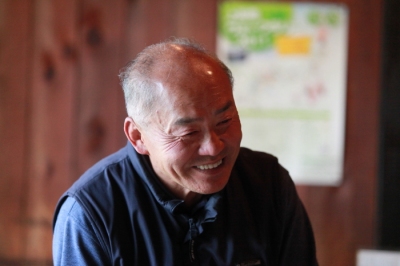 We at SHK (Sacred Highland Kamikochi) also focused on Kamonji-goya Hut during our “Traditional Style Guide”. This is one spot in Kamikochi definitely worth visiting.