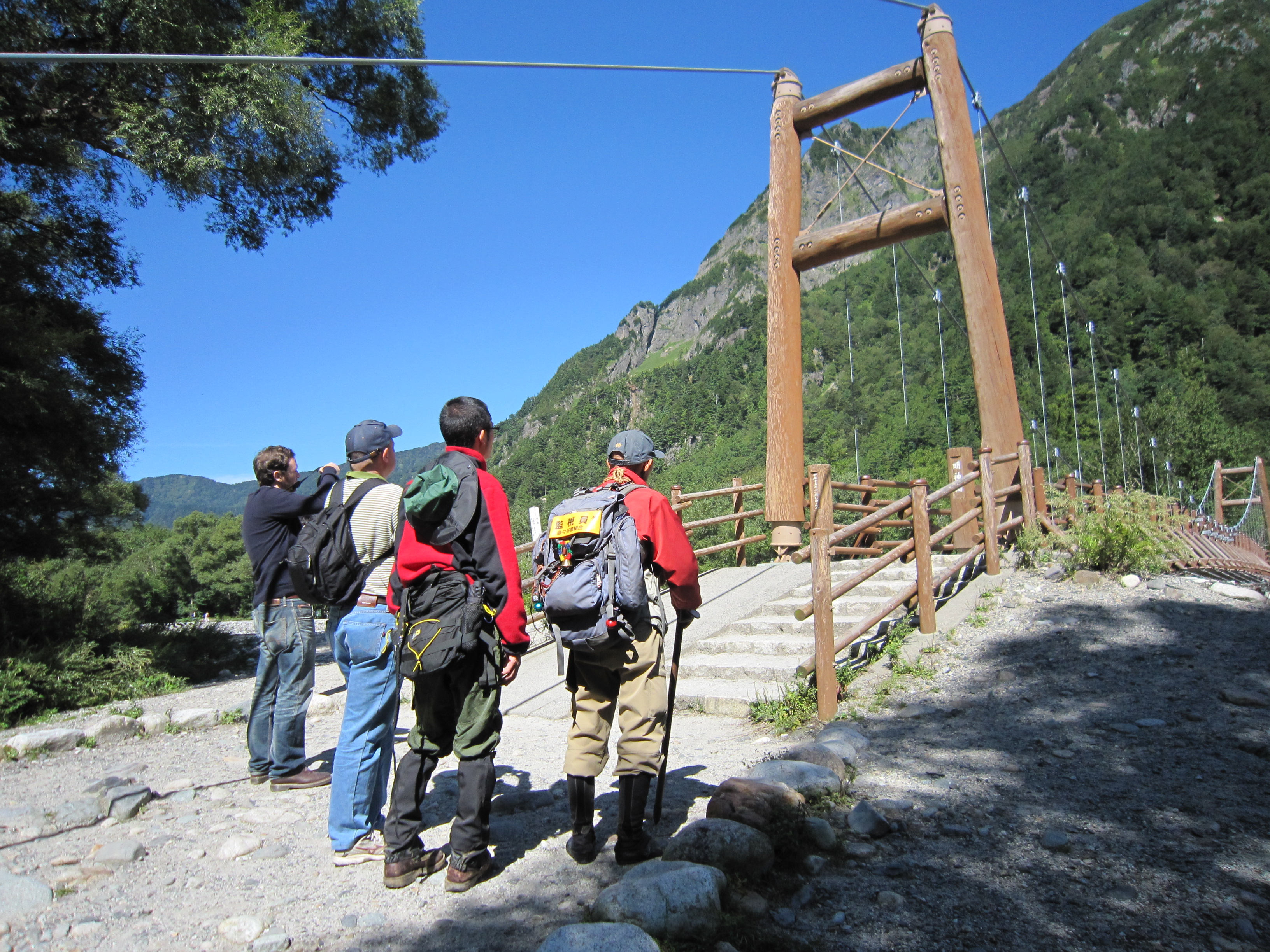 Are you thinking that Kamikōchi is just a mountain resort? Or that just walking around the area and enjoying the view is enough? If your answer is yes, you are only enjoying half of Kamikōchi.

The basin surrounded by the Northern Japan Alps is full of interesting culture handed down for generations by local people.

Would you like to experience “mountain culture” that only be found in Kamikōchi? 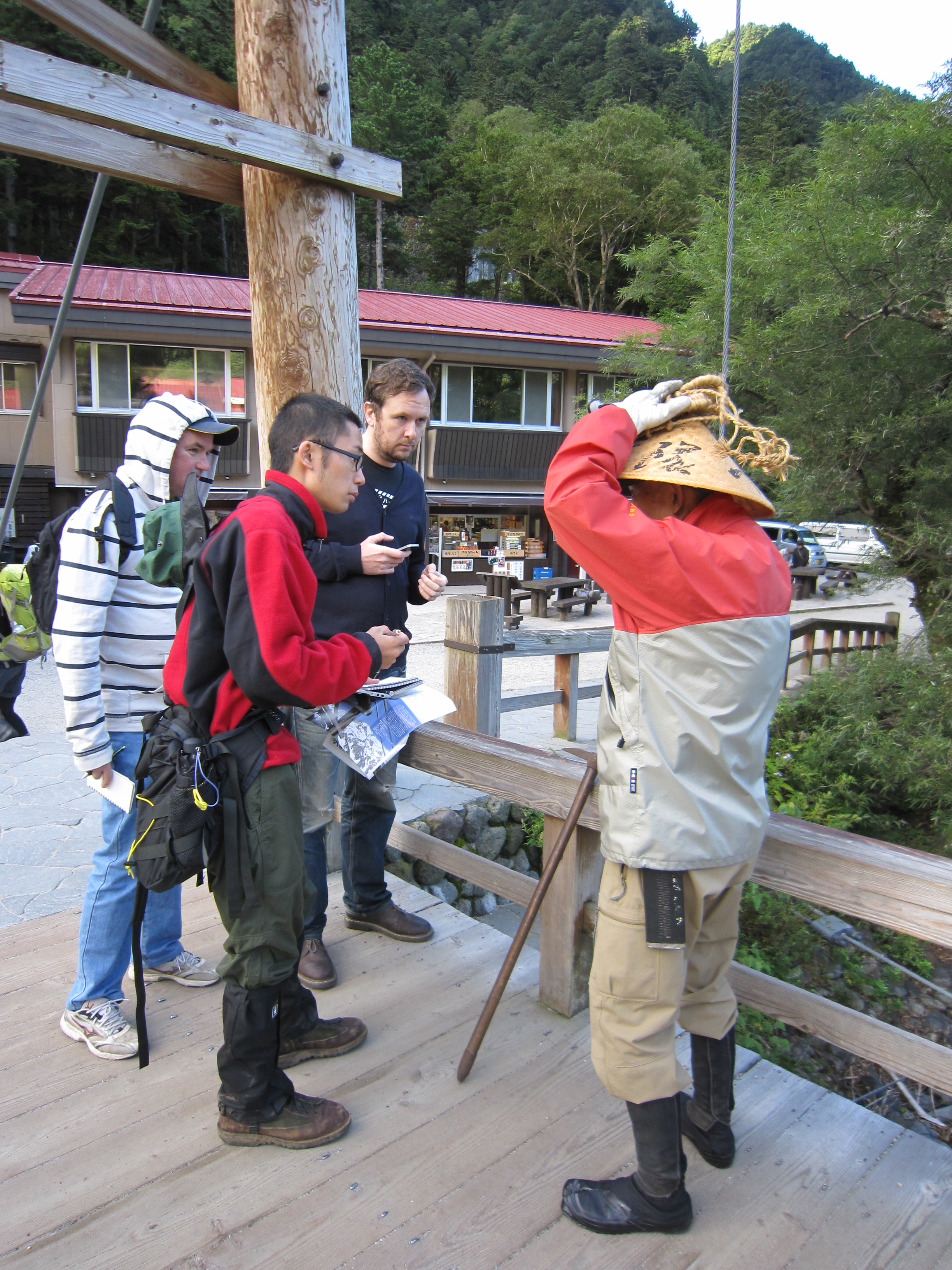 We at SHK (this website called ‘Sacred Highland Kamikōchi’) conducted a survey targeting non-Japanese tourists and found that there are some people who not only want to enjoy the nature of Kamikōchi but also the culture. As a result, we discussed this point with the guides of Kamikōchi and developed a tour that delivers Kamikōchi culture, the “Traditional Style Guide” tour.

We executed an experimental tour on September 8th which took place from roughly 8am to 12pm. And as Walter Weston, the father of Japanese modern mountaineering, showed to the world the existence of Kamikōchi, the greatness of Kamikōchi is now going to be spread to the world again through non-Japanese.

For the memorable experimental tour, we welcomed Mr. Kazunari Okuhara (the former owner of Gosenjyaku Lodge), one guest from England, another from Australia, and myself who acted as the translator of this tour. 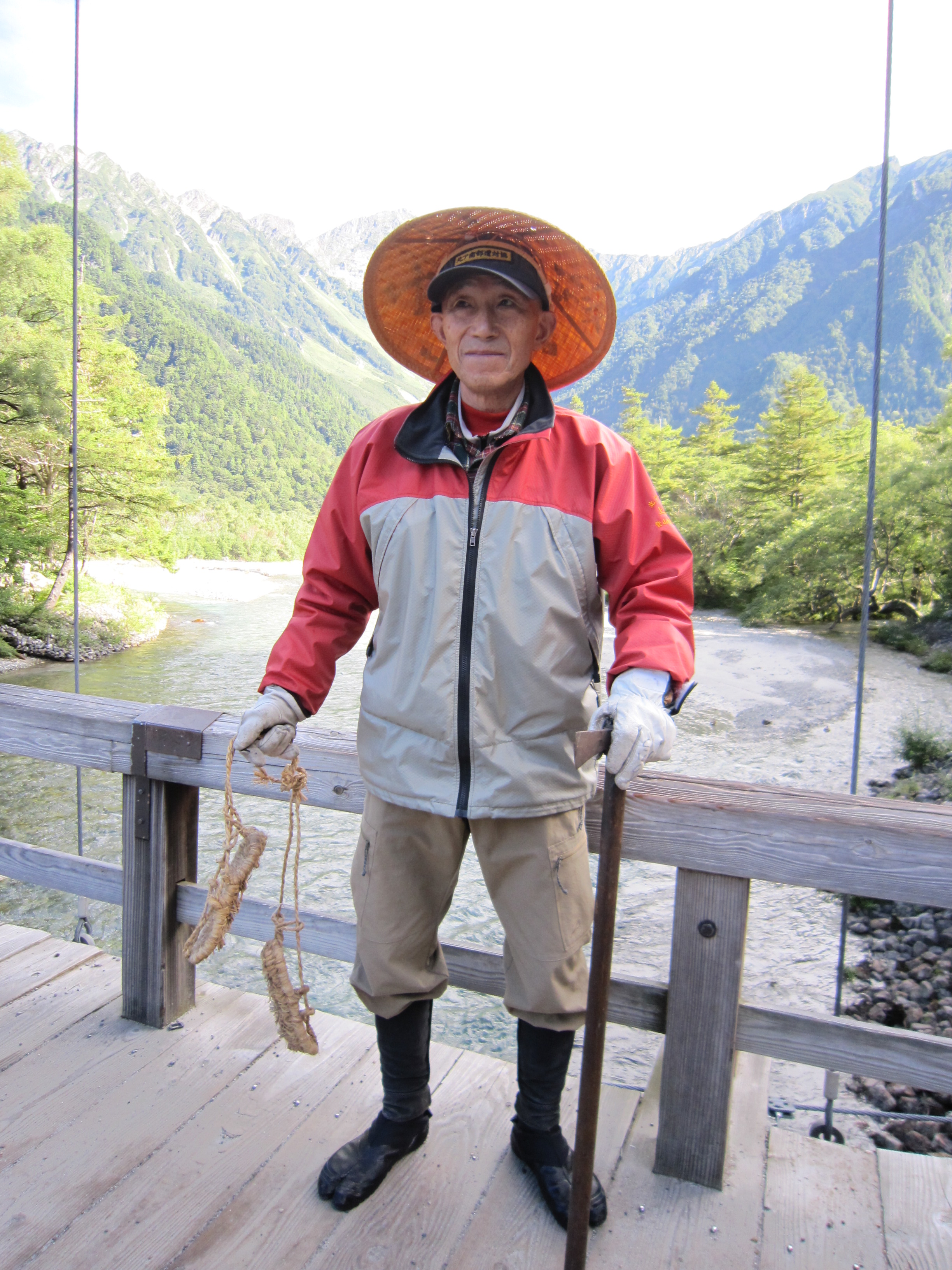 Mr. Okuhara, currently 73 years old, is a living legend having spent more than 50 years in Kamikōchi. He is an alpinist and has climbed Mt.Roppyaku-zan, a rocky mountain in Kamikōchi  famous for still not having a well-maintained trail, an amazing 220 times.

His appearance with his nata, a Japanese knife similar to a machete, got the guests indulging in humorous comments such as, “This guy is the Japanese Crocodile Dundee!” and “We aren’t scared of bears anymore!” His friendly characteristics also made me laugh throughout the tour.

To show us a bit of history, Mr. Okuhara also brought along a traditional straw hut and sandals from the museum and an ice axe handed down from his grandfather. These relics got the firm attention of the guests before the tour even started. 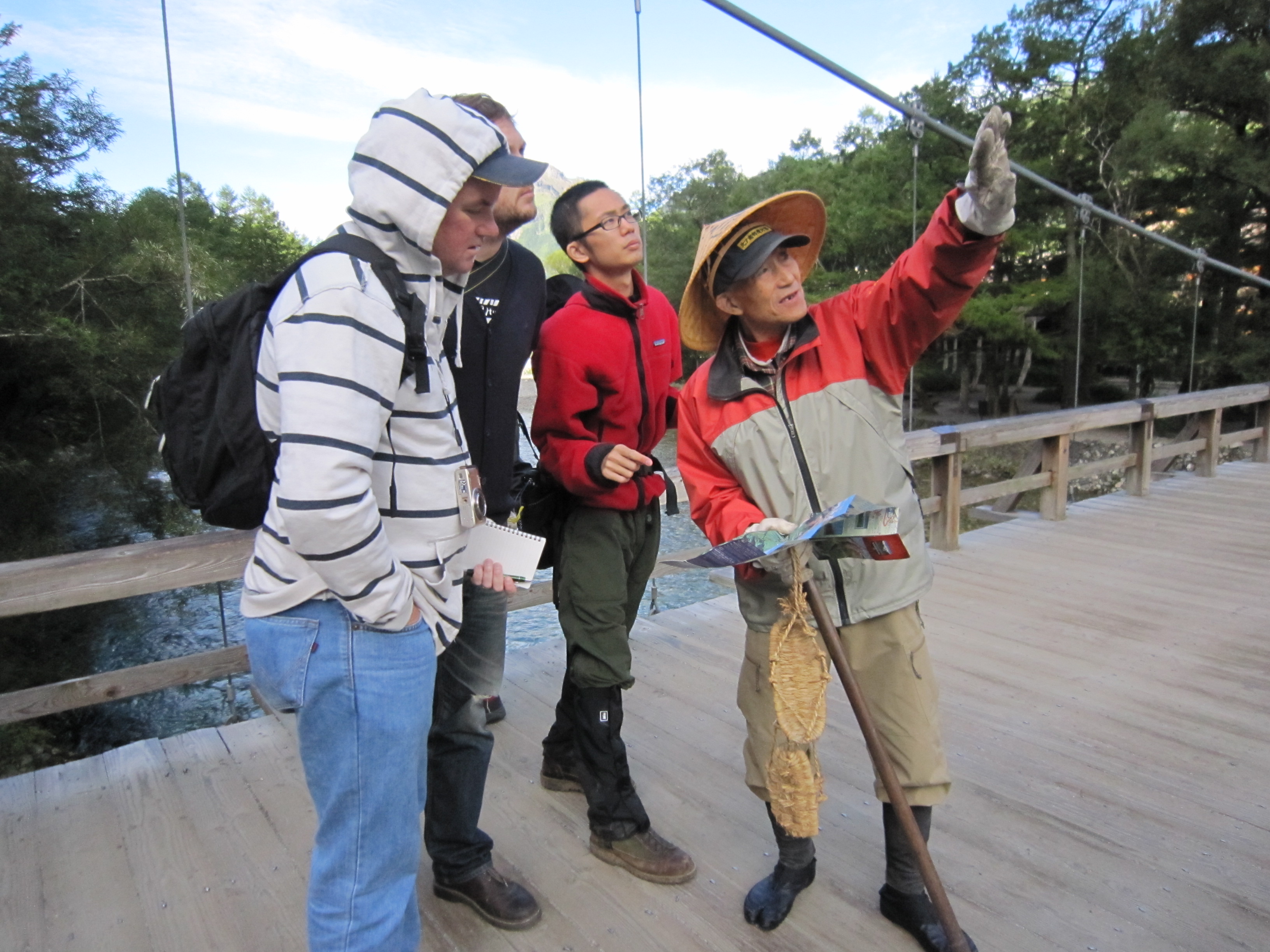 Gazing at the Hotaka Mountain Range

To begin the tour, we started in the center of Kamikōchi at Kappa-bashi Bridge, the most famous tourist spot in Kamikōchi. Mr. Okuhara explained that it was the fifth bridge built at that place and was built 101 years ago.

The guests were interested and continually asked interesting questions like, “Why was the bridge built at this location?” and “How did the local people cross the river before the bridge was built?”

When Mr. Okuhara told of his memory of the eruption of Mt. Yakedake in 1962, the guests were even more interested, listening carefully to every word coming out of his mouth. 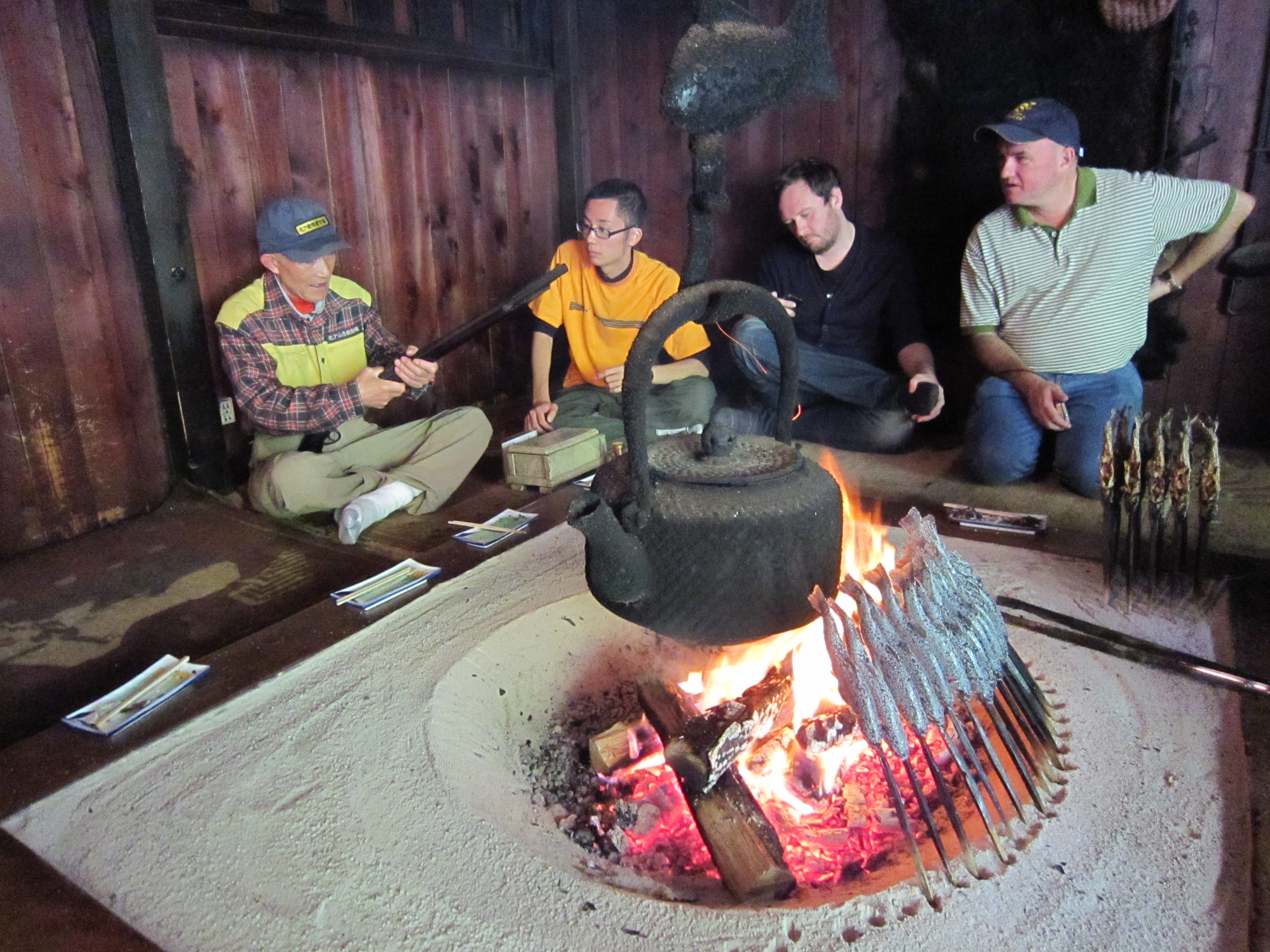 From there we began walking along the Azusagawa River and continued for about an hour. It was then that we spotted the main highlight of the tour, the hut once used by Kamijo Kamonji, the man who guided Walter Weston to Kamikōchi.

This famous hut, Kamonji-goya Hut, is known for being a traditional Japanese mountain hut, something very rare these days.

Inside the hut, we listened to stories of Kamijo Kamonji by Mr. Okuhara while we sat around the irori, a Japanese traditional fireplace, and ate grilled iwana, Japanese river trout. 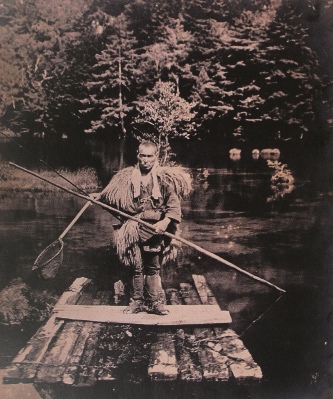 The story of Kamijo Kamonji living in Kamikōchi by himself was particularly surprising to the two guests as back in those days Kamikōchi was a place where people rarely traveled.

The Englishman commented, “With the number of natural distasters in Japan being so much higher than in England, I cannot believe that an old man was living in Kamikōchi by himself even through winter.” I was also deeply impressed, as I have hiked over Tokugo-toge Pass, the only way of access to Kamikōchi back in the days of Walter Weston and Kamijo Kamonji.

On the other hand, the Australian guest seemed very interested in the traditional construction of the mountain hut. He looked up at the deep black, soot-covered ceiling above the irori and asked, “How often do you clean the celiing?”

Leaving the hut, we went to Hotaka-jinja Shrine Okumiya, a shrine is dedicated to the god of Kamikōchi (once known as the highland that the god descended to). Mr. Okuhara prayed at the shrine, and the guests followed Mr. Okuhara, imitating his actions. 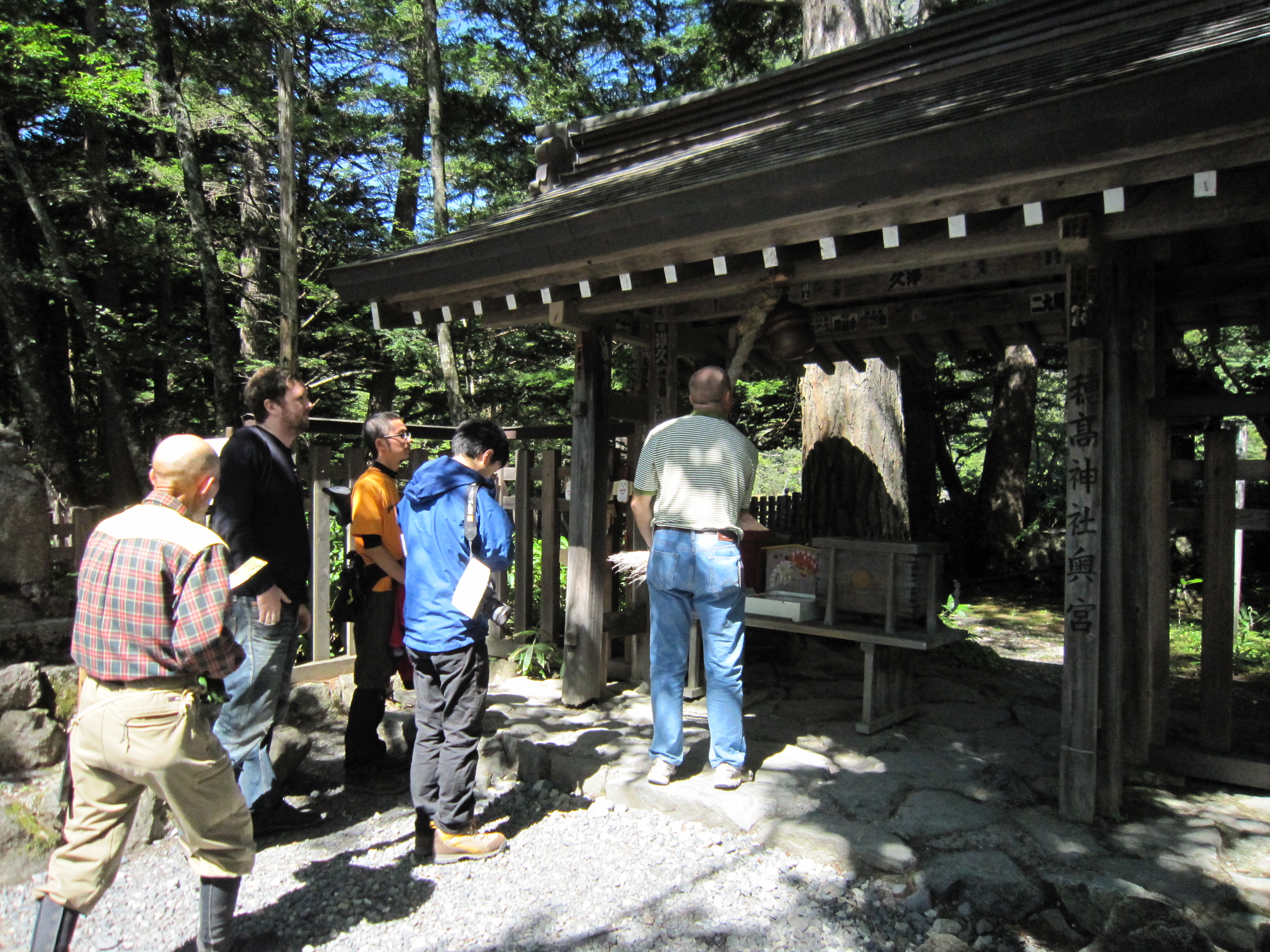 And next at Myojin-ike Pond, there is a hushed silence. To me, it felt mystical, as this was where the god once descended. 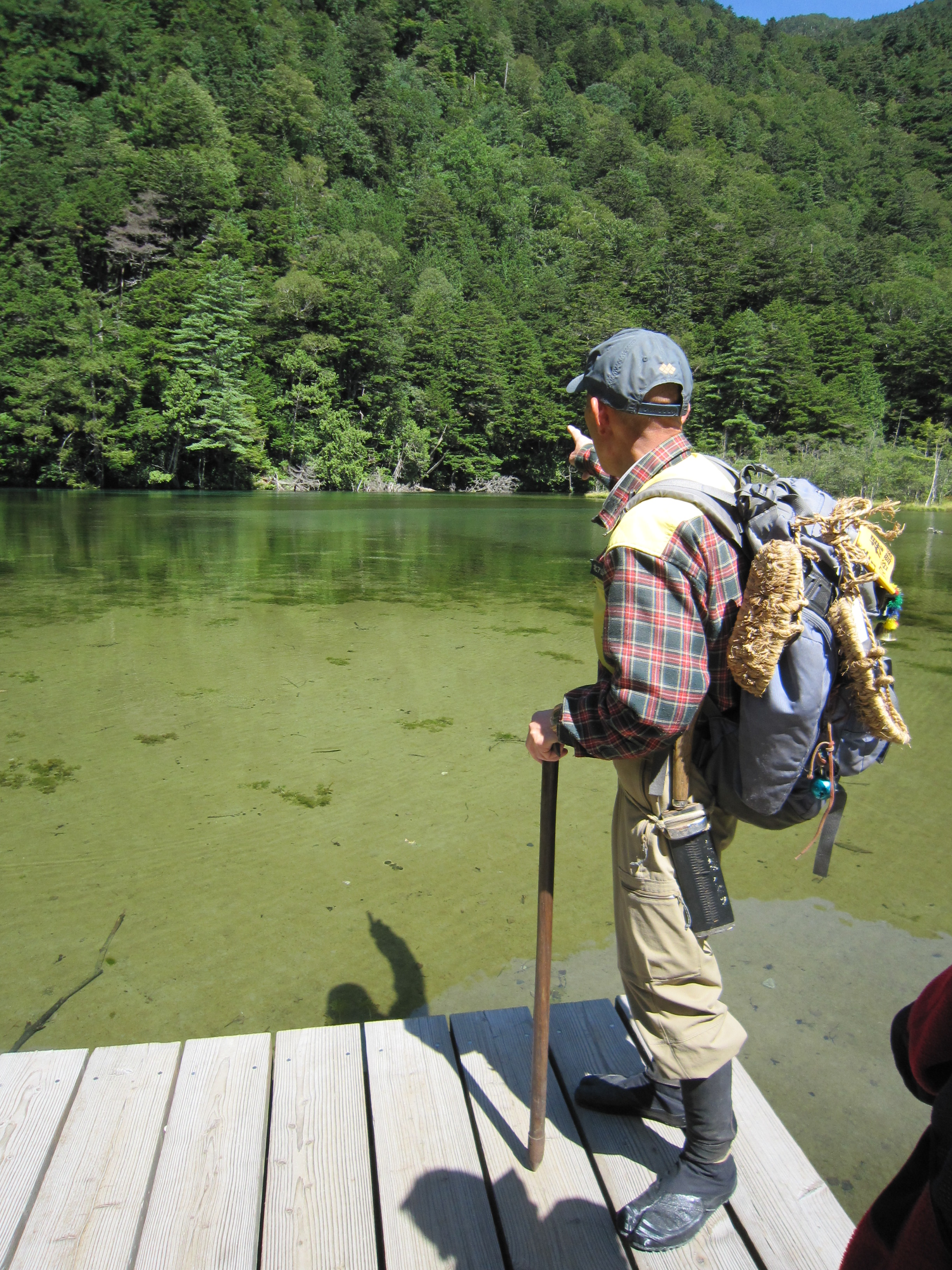 From Myojin-ike, we returned to Kappa-bashi Bridge, stopping on the way at a river that Mr. Okuhara showed us. There we refilled our water bottles with cold and refreshing water and listening to another story from Mr. Okuhara, this time with pictures. 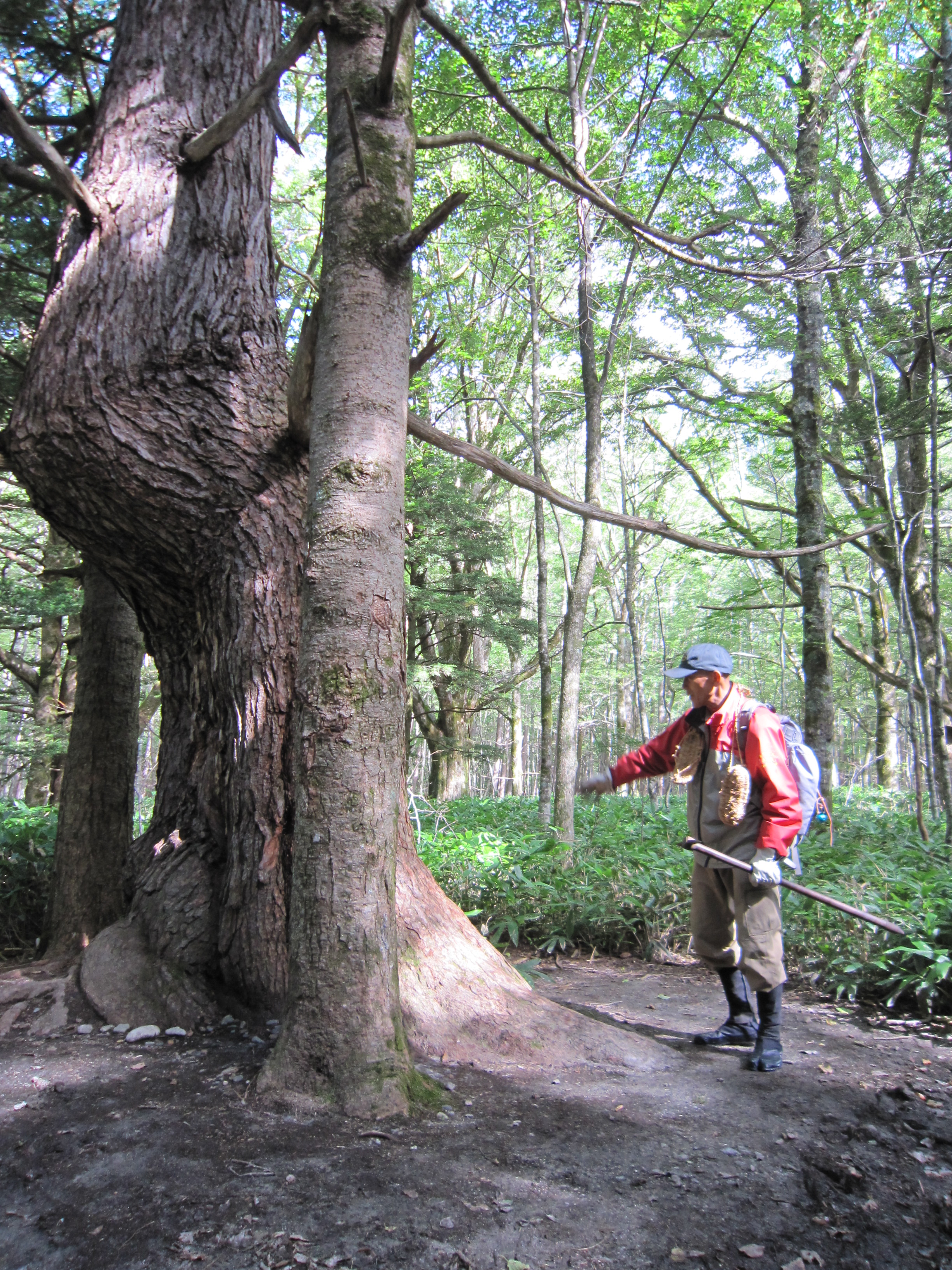 Throughout the tour, the guests’ attention was fixed on Mr. Okuhara. He showed us some of the amiable aspects of his character like suddenly singing his original song ‘Praise of Roppyaku-zan’ toward Mt. Roppyaku-zan and how he beats off monkeys that get too close to tourists.

(These days, the distance between humans and monkeys is closing, and this is becoming a problem due to Kamikōchi being a national park trying to protect the balance of nature.) 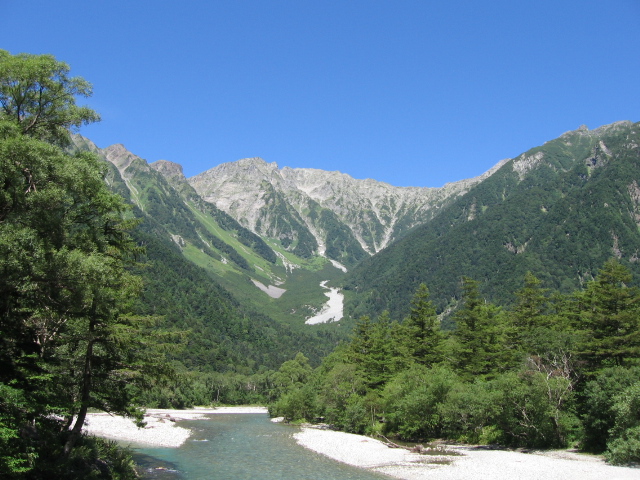 Take You Back Home?

During the tour, I kept hearing the same phrase from the two guests, “This is similar to that back home.” I found it interesting that the places they were referring to were a national park in England and a tropical rainforest in Australia.

It seems that Kamikōchi’s hidden beauty was drawn out through the “Traditional Style Guide” and through Mr. Okuhara, the guide with such a long history in Kamikōchi.

This hidden beauty took this tour’s participants back home for a while. Maybe it is “mountain culture” that takes us back.

Join The Next Tour!!!

SHK is now planning to execute a second “Traditional Style Guide” tour because of the positive results from the first. We will announce on our website the date, tour content, fees, and other details when they are decided. The next tour will be open to many more participants than the first. Please join us if you want to see “the other half of Kamikōchi”. 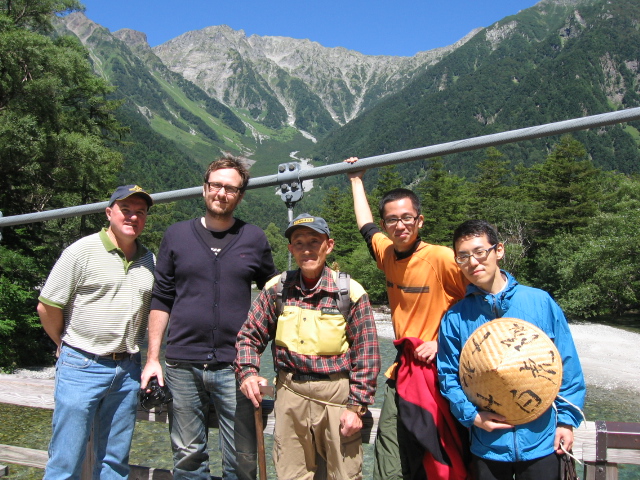 For further information about the tour, please contact us through SHK’s Guestbook (http://www.kamikōchi.org/guestbook) or Facebook (http://www.facebook.com/kamikōchi). We hope to see you on the next tour.