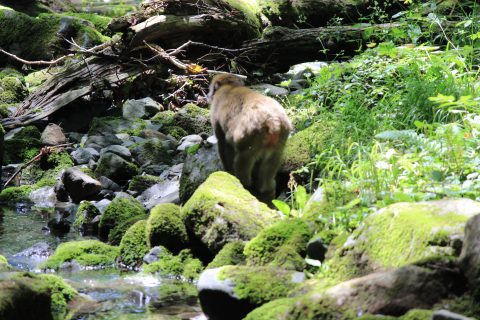 We’ve all seen ’em: mothers cradling their adorable babies by the roadside, lone males ambling down forest paths without a care in the world, and the common site of one furry forest dweller languidly picking nits of his mate in the summer heat.  I am of course talking about Kamikochi’s monkey population: the Japanese macaque (or ニホンザル to his mates). 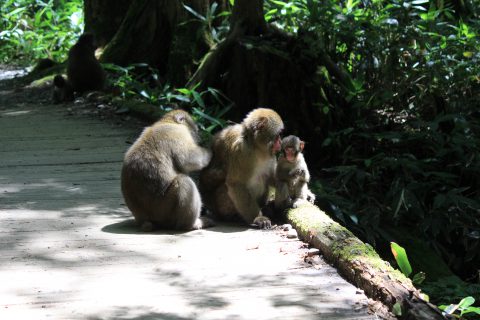 These primates are among the most visible tenants of Kamikochi and you’re likely to catch a glimpse of one or more during a daytime visit.  To foreigner visitors, they are both exotic and charming, with bushy fur framing wizened faces and behavior which often mirrors that of humans.

But all this cuteness comes with a caveat: monkeys are wild animals and not to be trifled with. They are intensely protective of their young and may react violently to perceived threats from humans. Passing one on the path, you may be tempted to make eye contact as you would with a person. This could be seen as a challenge and could lead to a tense and even dangerous situation. 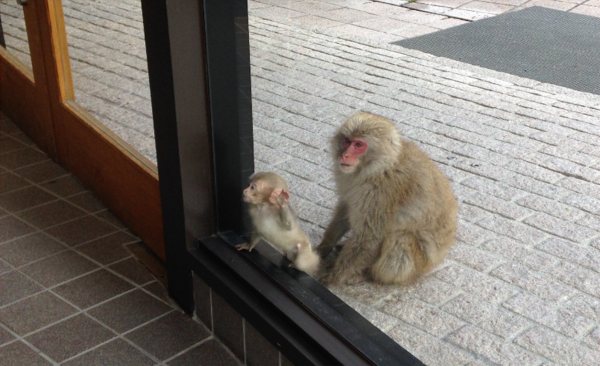 All too often, some well meaning but sadly misinformed tourist will bust out a selfie stick and try to frame the perfect shot of themselves with monkeys framed in the background (naively backing towards said monkeys as they do so).  This is a really bad idea for reasons already mentioned.  While monkeys may be photographed, this is something you want to do from a distance.  It’s time to get make use of that expensive zoom lens or perhaps the always improving optical zooms on recent smart phones.  Be discreet and don’t get too close. 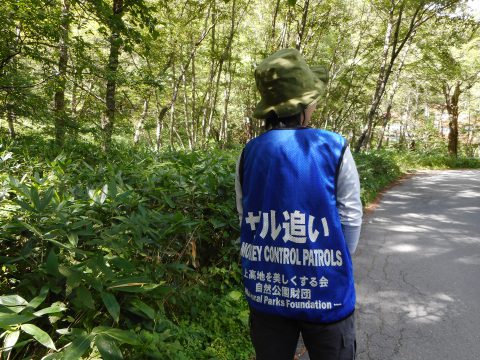 As reported in the latest post on the excellent National Park Guide Kamikochi blog, volunteers are now performing the vital role of “Monkey Control Patrols.” They monitor monkey activity in areas of the park frequented by humans to ensure the precocious primates don’t get out of hand. Specific duties include chasing off monkeys to preserve distance between the park’s full time residents and the humans who visit their homes.

We salute the Monkey Control Patrols and their efforts to keep both people and primates safe. At the same time, we’d once again like to urge all visitors to the park to exercise common sense and not intrude into the space of monkeys and other wildlife in Kamikochi.  You’re a welcome guest, but it’s a privilege that comes with a few simple responsibilities.

Source of information and images: