The Kamikōchi Heizan-sai (Closing Festival) held on November 15th marked the end of this year’s tourist season in Kamikōchi. The roads have been closed and will remain so until the end of next April.

Looking at Kamikōchi these days, the scenery has changed a lot, now being devoid of most color. On this final day, the mountains and forests seemed to meld into the grayish white of the clouds. Although the basin is still free of snow for the most part, only slightly higher up, snow has begun to cover all. 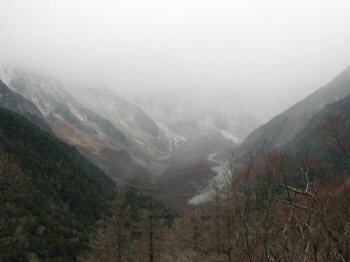 On the 14th, rain prevailed in Kamikōchi, and midway through the night, the rain turned to snow from about 1800 m and on upwards. The weather let up a bit in the morning, and temperatures at noon were a chilly 4℃. 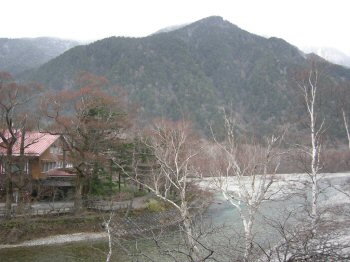 It was then that the Shinto ceremonial part of the Closing Festival was conducted near Kappa-bashi Bridge. 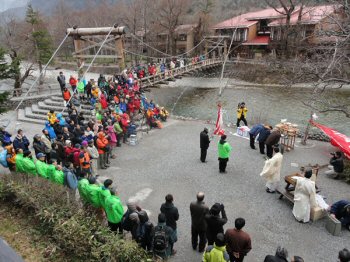 Although difficult to see, Mother Nature decided to pull a few tricks out of her sleeve with strong winds setting in. Nevertheless, the festival continued on. 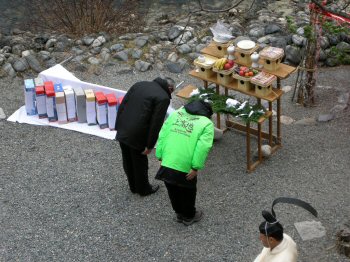 Below, the Shinto priest performs some ceremonial rites and empties sake into the Azusagawa River. 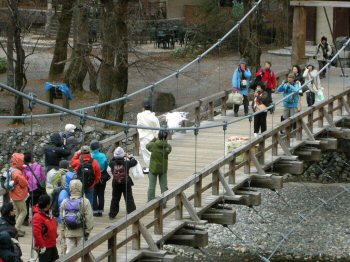 Look at all this sake! 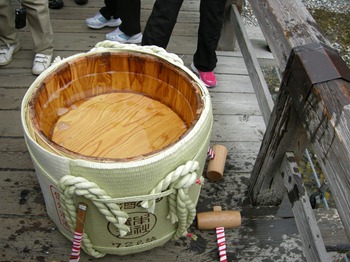 It being a special day, it seems that Mother Nature was not content with simply the cold winds. So, to make the ceremony all the more memorable, she decided to let loose the first snow of the season to reach the Kamikōchi basin. Truly a day to mark the changing of seasons! 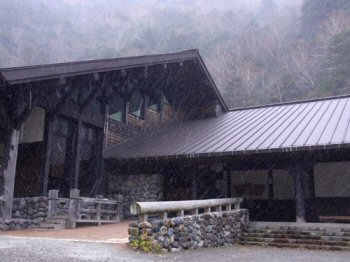 Above, the wind and snow was in full force. And with a look alongside the trail, snow could be seen collecting on the ground and in the leaves of the sasa (bamboo grass). 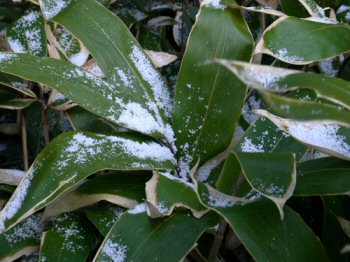 Now, it is only a matter of time until the whole of Kamikōchi takes on the snowy look of the mountains below. 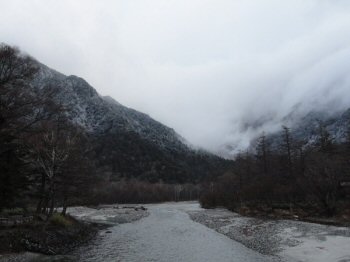 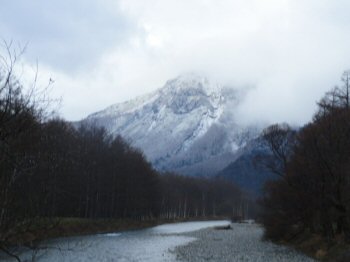 Kamikōchi has now entered its long winter sleep and will be rejuvenating itself for the next five months. Come next April, Kamikōchi and all of the staff that operate here will once again be ready to host us all. Thank all of you for visiting Kamikōchi this year, and we hope to see you back next year!