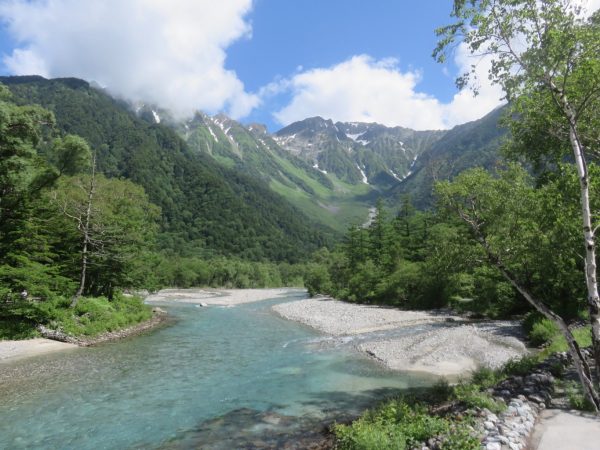 There is a poetry to the landscape of Kamikochi. The area’s major geographic features are also powerful symbols of alpine nature and culture. The Hotaka peaks crown the horizon upriver from Kappa Bridge. Taisho Pond reflects the rocky ridges in its dazzling, mirror-like surface while Mt. Yake exhales plumes of dark smoke like a sleeping dragon. And winding through all of these natural landmarks like a connecting thread is the mighty Azusa River. 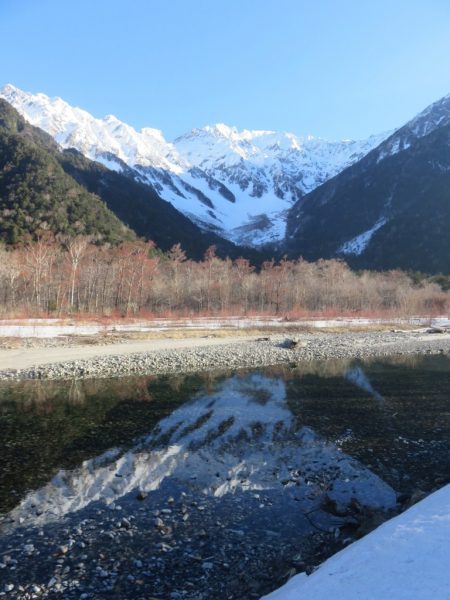 Taken back in April, this photo shows the still snowy Hotaka peaks mirrored in the Azusa River.

The Azusa River takes its name from a tree of the genus catalpa known as azusa in Japanese. These trees have been prized from ancient times for the strength and flexibility their wood and bows made from them, called azusayumi, have traditionally been presented as tributes to Japan’s Imperial Court. Some Japanese parents name their daughters Azusa in the hopes that they will grow strong like the bows made from azusa wood. The express trains linking Matsumoto to Tokyo also bear the name “Azusa.”

The river itself flows from a spring located deep within Mt. Yari, perhaps the most famed peak in the Northern Alps. The Azusa flows through Kamikochi, into the Matsumoto Basin and beyond, merging with the Sai and Shinano Rivers (the latter being the longest river in Japan). 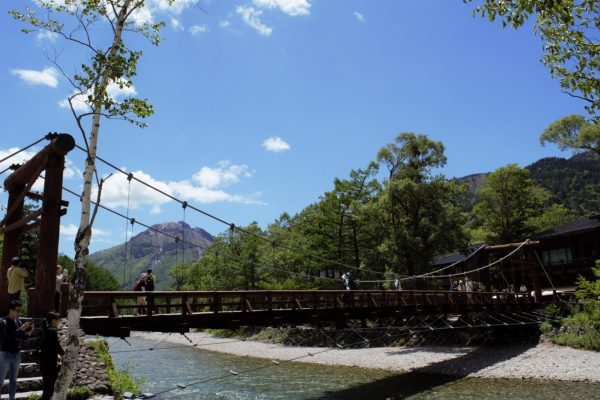 Practically speaking, the current of the Azusa generates electricity at a number of hydroelectric plants. More importantly, these pure alpine waters have been used to irrigate rice fields from Matsumoto to Azumino City, an area settled by the Azumi people many hundreds of years ago. Like blood pumping from the very heart of Northern Alps, these waters have nurtured the crops and countless generations of people over the centuries. 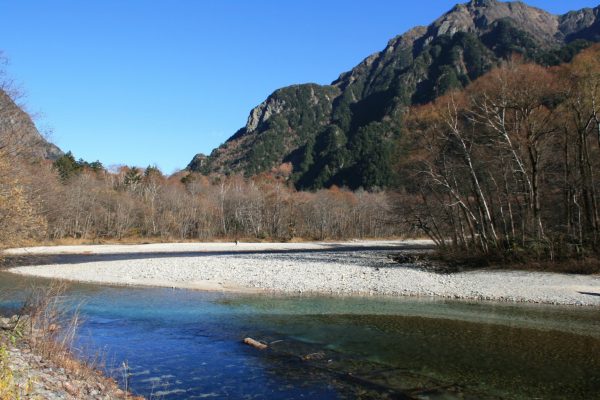 Taken near the end of the season last November, this picture shows the deep blue color for which the Azusa River is famed.

There is an important religious dimension to the Azusa River which connects the Myojin Shrine to its parent shrine in the Hotaka area of Azumino City. Every year, the shrine conducts a ceremony in which river water taken from the Hotaka area is symbolically returned to Myojin Pond.  Japan’s native Shinto religion venerates both purity and the divinity which inheres in all nature, so the returning of river waters to a location near their source is a key ritual. Consider also the fact that mountains, with their high elevations are regarded as places where gods would descend to earth. Having the 3180m tall Mount Yari as its ultimate source naturally adds to the Azusa’s status as a sacred river. 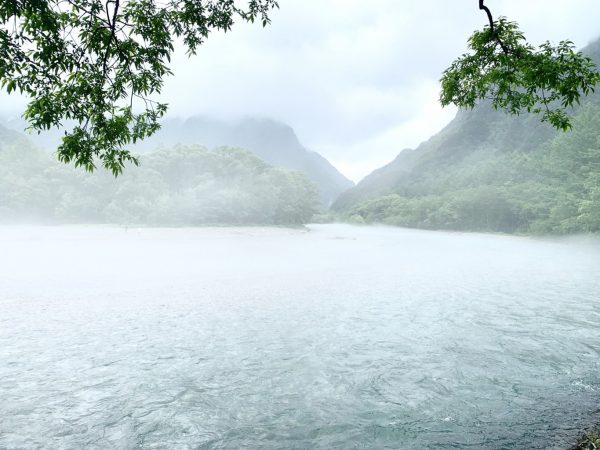 The Omagari, so named for being an especially broad segment of the river, seen here shrouded in late June mists

Another way in which the Azusa river shaped the terrain of Kamikochi can be seen in how it effectively created the Taisho Pond back in 1915. Mt. Yake had errupted, resulting in a partial blockage of the Azusa whose water was then diverted to form the pond we all know and admire today. In this way, one iconic feature of Kamikochi’s landscape was formed out of the fateful coming together of  two others: a volcano and a river giving birth to a pond. Really folks, you can’t make this stuff up. 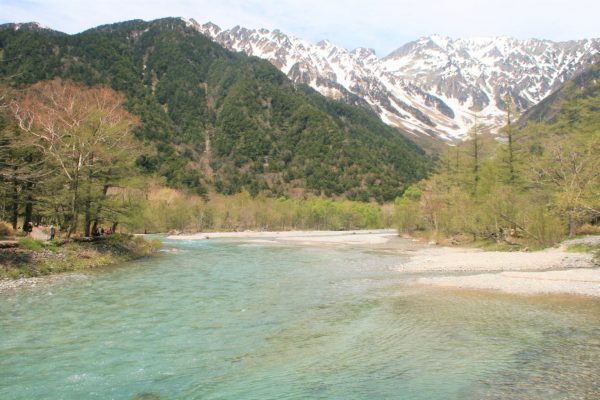 The Azusa River is also something of a chameleon. After heavy rains, sediment rises up from the river bed to dye the surface a deep, tea-like brown. At other times, the waters appear crystal clear or else mirror the brilliant blue skies above to take on a deep azure. You are advised not to drink these waters however, as you might ingest parasites (sorry, but we had to mention this). 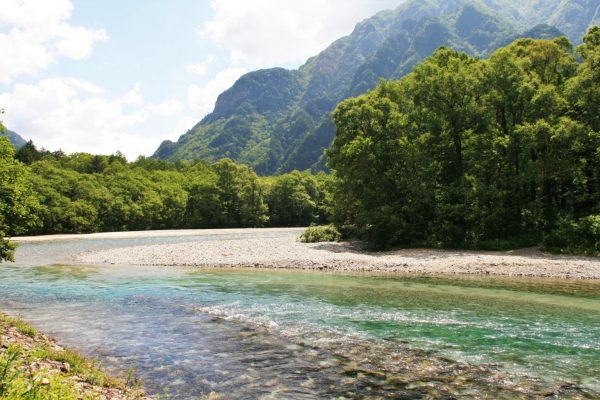 The special attributes of the Azusa’s water did not escape the attention of Walter Weston. Back in the 1890s, he passed through Shinjima (now Shinshimashima) and Hashiba and en route to Yarigatake. In his groundbreaking travel book, “Mountaineering and Exploration in the Japanese Alps,” he mentions that the water was said to have “the remarkable property of rendering unusually white the complexions of those who wash in it.” A short time later, he encountered s group of young women working a silk loom, and remarked:

The simple machinery for winding off the silk from the cocoons is water powered and gives employment to a score of bright-faced girls, varying from twelve to twenty years of age. Their neat appearance helped us to credit the story about the river water. (Mountaineering and Exploration in the Japanese Alps, 21-22). 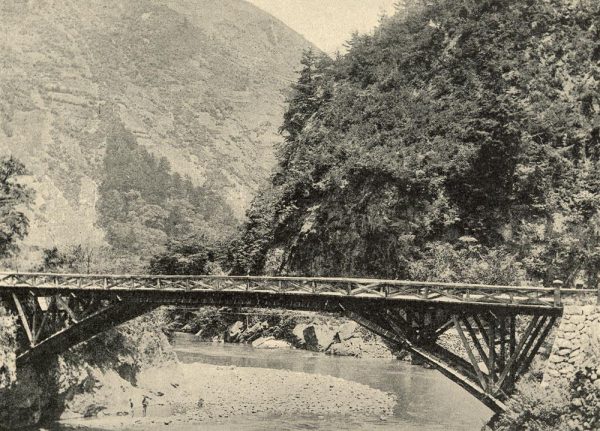 H.J. Hamilton’s photograph of a bridge at Hashiba. ( source: http://www.baxleystamps.com/litho/weston_1896.shtml )

Wherever you go and whatever you do at Kamikochi, the Azusa River will be part of your experience. Take the time to appreciate it from many vantage points and against many stirring backdrops. Luxuriate in the cool air by the waterside and feel the power of the current coursing swiftly downstream.

Flowing out of alpine heights from a era unknown to our reckoning and on to the last syllable of recorded time, the Azusa rolls on through it all, placid, indomitable, majestic and kind. I can’t imagine the Northern Alps without Azusa. I can’t imagine her not in my life. 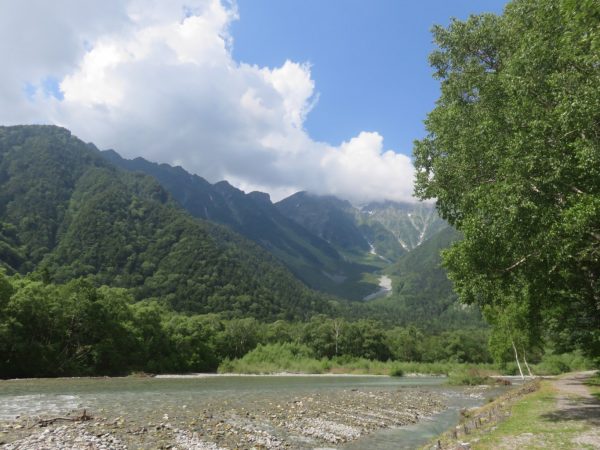 Text of Weston’s “Mountaineering and Exploration in the Japanese Alps” at archive.org: https://archive.org/details/mountaineeringex00westrich/page/22