If you’ve ever heard the names of some Japanese plants, you might wonder what they mean or how those plants got such names. Well, Japanese have named many natural things (mountains, lakes, rivers, etc.) by the way they look, and plants are no different. There are some really interesting names out there, and you can find plenty of interestingly-named plants growing in Kamikōchi. Take for instance the plant below. What does it look like to you? Okay, before I go any further, let’s make this into a quiz. Try to guess what these plants are named after. And be honest now, no looking at the answers until you’ve tried to guess! 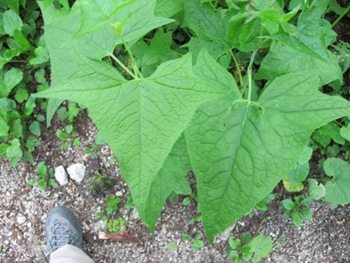 I’ll give you a hint. Think of an animal that comes out at night. Need one more hint? Think of a superhero related to this animal. Did you get it? Well, this plant is called koumori-sou in Japanese. Koumori means ‘bat’ in English. Sou means ‘plant’. Do you think it resembles a bat or Batman? I think it’s a pretty good and easy-to-remember name. If you got this one right, give yourself a point.

Okay, next. This one is named after a decoration you can see up until the holiday, Children’s Day (Kodomo-no-hi). If you have seen carp streamers (koi-nobori) before, you might have noticed this, too. 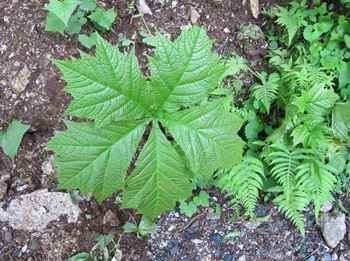 It is called yaguruma-sou in Japanese and is named after the ‘windmill-like arrow wheels’ (yaguruma) that spin up at the tops of the poles that carp streamers are hung from. If you don’t know what these are, next time Children’s Day comes around, take a look.

Moving on, this plant’s name comes from another plant seen all around Japan in the mountains. It’s often seen growing everywhere, swallowing trails through the forest. 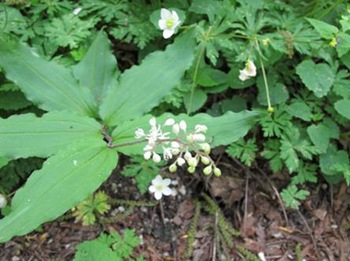 This plant’s name is yuki-zasa. Yuki means ‘snow’, and zasa means ‘bamboo grass’ (sasa). If you don’t know sasa, just hit the trails and head of into the mountains anywhere. You’re guaranteed to find it. It’s similar to this plant, although much taller.

Alright, only two more questions. Good luck. This one is named after an animal that Japanese love. They are especially famous around Kushiro in Hokkaido, and Japanese children often make them out of origami. This last one is a big hint! 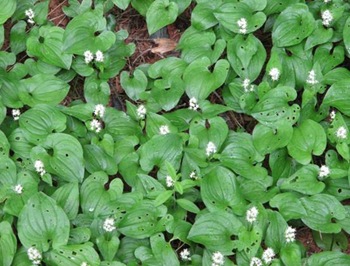 Here we have mai-zuru-sou. Mai means ‘dancing’, and zuru comes from tsuru and means ‘crane’. If you’ve ever seen the long chains of origami that children have made, they are paper cranes. Looking at the picture above, I can see how it look like they’re dancing.

And here we are at the last and final question. I’ll tell you now, this one is difficult. If you can guess what the eight leaves going around in a circle resemble, you are a better guesser than I am. 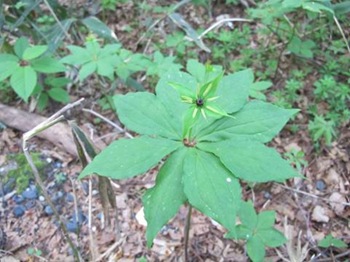 I told you it was difficult. This plant is called kuruma-ba-tsukubane-sou. What a mouthful… To break it down, kuruma means ‘car’, ba means ‘leaf’, and tsukubane is a shuttlecock used to play hagoita (traditional Japanese badminton). So, putting it all back together into something that makes sense, we have a car wheel with feather-like spokes that resemble a tsukubane. If you guessed anything close to a wheel, give yourself a point. And, here are two pictures of a traditional hagoita racket and tsukubane for those of you who are curious. 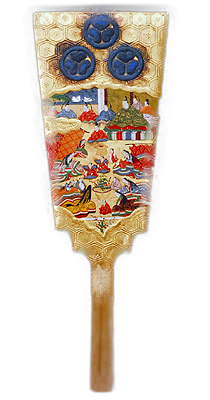 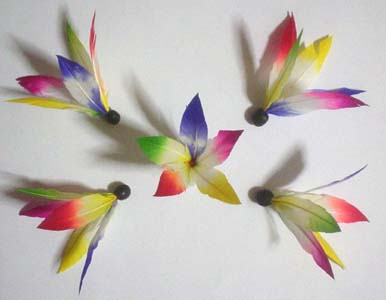 Okay, finished! Count your points. If you guessed all five of the plants’ meanings, amazing! You must have been in Japan for a while, know Japanese plants extremely well, or be gifted with psychic powers. If you got 3-4 correct, that is still a great job. Either way, whether you knew them all or didn’t know any, I hope this was a good chance for you to learn something about Japanese plants and Japanese culture as well.