The other day, while walking in the Myōjin-ike Pond area, a Kamikōchi guide spotted a kamoshika coming down from the mountains probably heading towards a nearby river for a drink. Now I can tell you what a kamoshika is called in English, but I’m sure it’s not going to make much sense to you. It’s called a Japanese serow.

So, did you know what it was? Didn’t think so… Okay, let’s just get to the pictures. If you’ve never seen a kamoshika, these are some great shots. 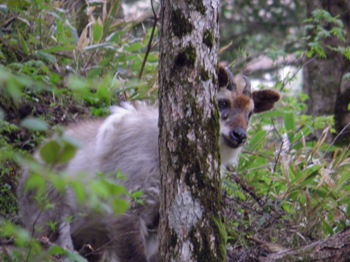 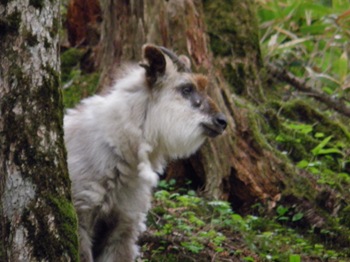 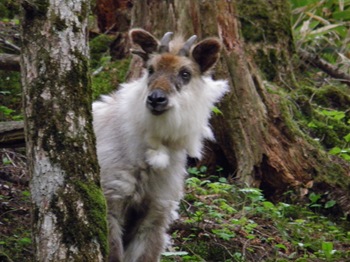 Apparently, it was the first time for the person who took these photos to actually see a kamoshika. Lucky guy… It’s always a great experience to encounter wildlife, especially for the first time. Because kamoshika are one of those special animals native to Japan and their numbers are not that great, it always feels like a reward to run into them.

I have seen kamoshika a good handful of times in various places such as the North Alps and Tōhoku and in pretty much all seasons. From my experiences, I can say that they are pretty timid creatures and a bit different from other animals, in that encounters usually last a while. The ones that I have run across were always doing one of the following three things: eating, drinking, or walking to and from those places. I’m sure you know the old saying, “A picture tells a thousand words.” Just look at these pictures and you’ll know a kamoshika.

Look at this little guy hiding behind the tree, as if no one can see him. And then looking away as if just minding his own business. And then staring right at the camera. This is typical kamoshika behavior. I usually get into a staring match with them which, trust me, can take time. I always turn out to be the victor, probably because I’m stubborn and not very interesting to them. And finally, when they are bored with you or no longer concerned about you being a danger, they move on.

Meeting a kamoshika always makes a normal day a great day. Have fun on your walks through the forest, and maybe you’ll get lucky enough to meet one someday. Good luck!