Hi everybody.  I’ve been asked to say a few words about some of the long term inhabitants of Kamikochi:  the charming but often unpredictable monkey population.

Anyone who has spent any amount of time here will know that Kamikochi is home to a large number of Japanese macaques.  They are fascinating creatures with unique habits reflecting their place in the natural environment.  They are also potentially dangerous and best appreciated from a distance.  You see, the environs of Kamikochi represent the monkeys’ natural habitat.  In a very real sense, the park is their home and we, the human visitors, are (from their perspective) univited guests.  Moreover, they are wild animals and must be treated with respect.

For the protection of monkeys and humans alike, the brave volunteers of the Monkey Control Patrol are now making their rounds in the park.

By now, you have probably seen posters like this one along popular hiking routes in Kamikochi: 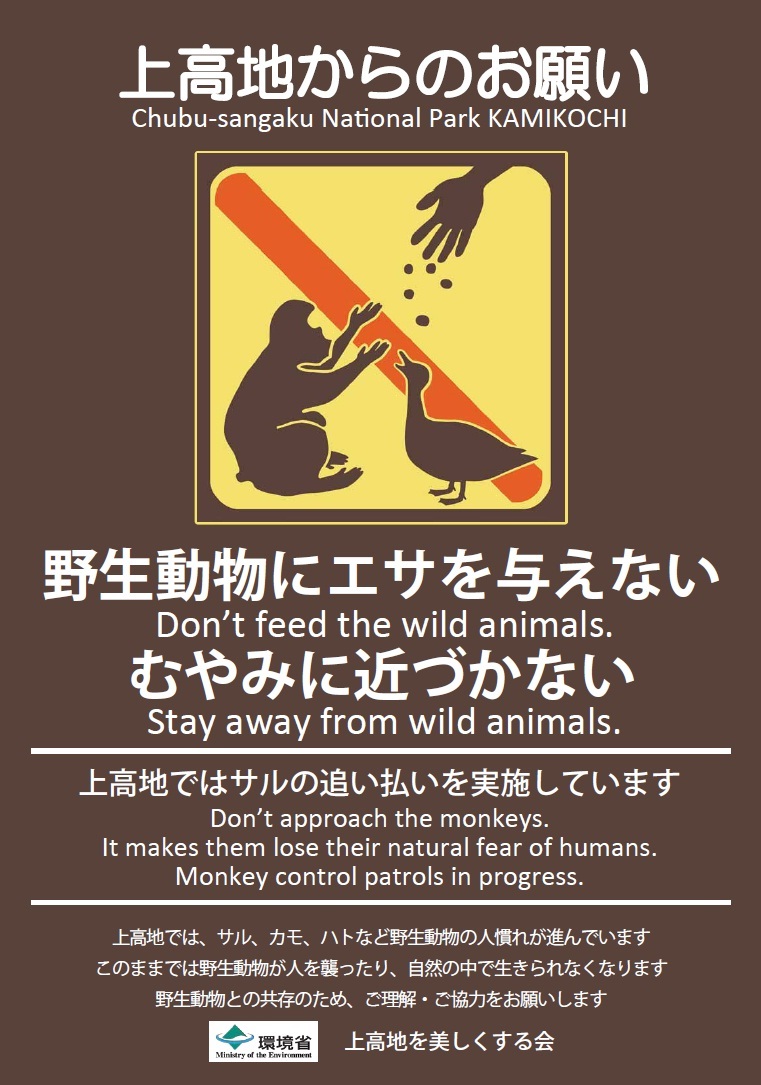 The main points you need to be aware of all spelled out quite plainly here:  do not not approach wild animals (especially monkeys) or give them food.  Excessive contact with humans can have a strongly negative effect on monkey behaviour, causing them to lose their fear of humans, and sometimes attack.

And that’s bad for everyone: bad for the affected visitors to the park, bad for the monkeys themselves and bad for future generations of travellers who would of course want to enjoy the park in its current unspoiled state.

So, if you have a zoom lense on your camera, use it.  Approaching monkeys is strictly forbidden by park rules for the reasons stated above.

Just to clarify, the monkeys of Kamikochi have yet to attack anyone directly.  They have, however, been known to get excited and behave in a threatening manner.  Reports of such episodes have been increasing, in fact, which is why members of the Monkey Control Patrol have been dispatched to keep potentially troublesome monkeys at a safe distance. 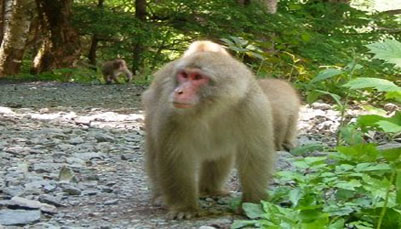 So, don’t be alarmed when you see members of the Monkey Control Patrol performing their duties in the park.  It’s for our protection as well of that of the monkeys and the larger environment they inhabit.  A large part of Kamikochi’s appeal is the extent to which it has remained untouched by the influence of modern industrial Japan.  We’d like to keep it that way.

A monkey-patrol map drawn by a volunteer.  The star marks the spot of a sighting.

Monkeys and other members of the ape family may charm us with their human-like behaviour.  The are cute (if not exactly cuddly), and their behaviour displays an intelligence beyond what we see in other animals.  On the evolutionary scale, though, we’re still millions of years apart.  And they are stronger than they look…

So as you enjoy the many spledid features of Kamikochi, please please remember to leave everything undisturbed, as you found it.  That’s a traditional rule of hiking and one to live by with respect to everything in nature.

Humans and simians: we can all enjoy what Kamikochi has to offer…just at a safe distance from each other.