With the rainy season offically reaching it’s end on the 18th of this month, the stage is set for the 2012 summer hiking season to begin in earnest here at Kamikochi.  That doesn’t mean that rain will magically stop falling from the sky, but rather that the period of concentrated rainfall expected in Japan from June to mid-July has now passed.

Everywhere you look these days, new life is emerging from the tree-lined paths of Kamikochi.  Let’s have a look at some of the plant and animal life you might expect to see during a visit.

We begin with the Coprinellus disseminatus, known by such colorful names as “Fairies’ Bonnets” and “Trooping Crumble Cap” in the English-speaking world, and often found on decaying trees.  Fungus experts tell us that it is edible, but neither tasty nor nutrious.  So please don’t eat them 😉

You are also likely to see hoverfiles from time to time.  Their outward resemblance to bees can be alarming, especially to those with allergies.  Don’t worry, though–unlike bees they don’t have stingers and pose no danger at all to people.

Here we see a species of moth, called the “nokogiri-suzume” (or “saw sparrow”) in Japanese.  With their black and yellow bodies, they cut an imposing figure.  Like the hoverflies, however, they are harmless. 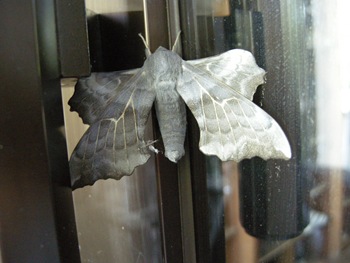 And last but not least, some of our fellow bloggers over at the National Park Guide site spotted this little guy peaking out of his lair last Wednesday:

Stoats are among the park’s more adorable residents for those lucky enough to see them.  This one is being surprisingly bold, considering the presence of people nearby.

We’d also like to take this opportunity to announce the planned return of the “Traditional Style Guide” tour on the morning of Wednesday, August 1st.  Follow us on Facebook for detailed information on this event as well as directions for how to apply: https://www.facebook.com/kamikochi .  Also, for a better idea of what the tour is like, take a look at this article from the last time we offered it: https://www.kamikochi.org/articles/experience/100-the-reveal-of-hidden-kamikochi .

Those of you who are interested in the “Traditional Style Guide” tour should be aware that you need to reserve your place on the tour by the 23rd of July (next Monday!).  If, for some reason, nobody has reserved by that time, we will have to cancel due to lack of interest.

As the weather heats up, so does interest in Kamikochi.  It’s a great place to get away from the scorching city heat and steaming asphalt at ground level and spend a little time in the cool, clean mountain air.  Remember to pack some sunscreen!