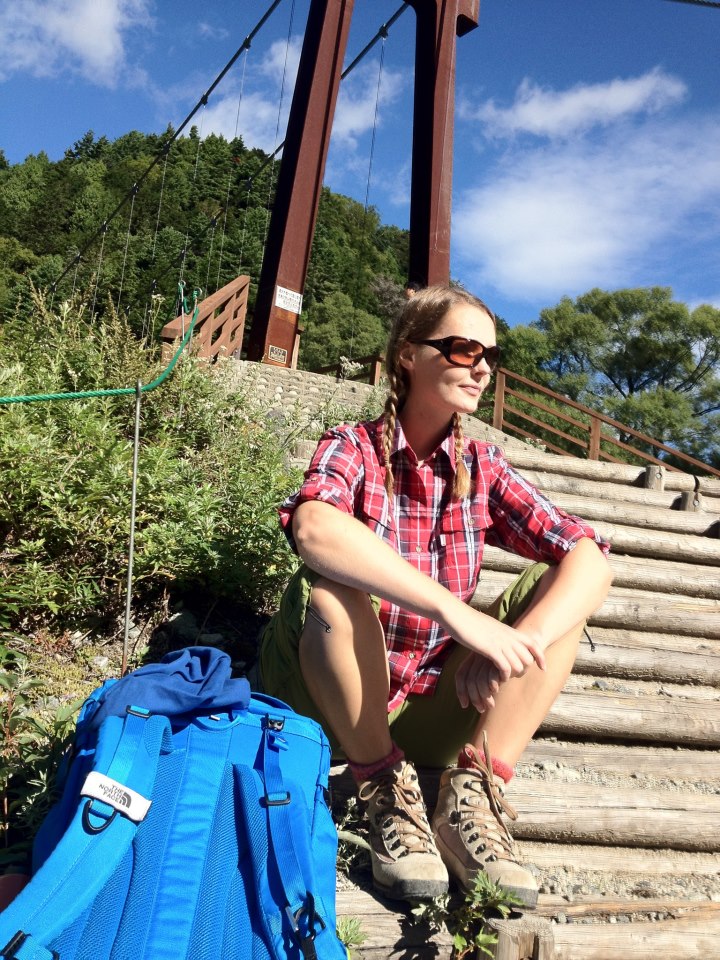 Our friend, long-term Nagano resident Tammy Crichton has graciously agreed to share this account of a September visit to the Karasawa Col along with some wonderful pictures. As we enjoy the precious final weeks of Kamikochi’s autumn 2012 season, we look forward to hearing more about Tammy’s adventures in the Northern Alps! 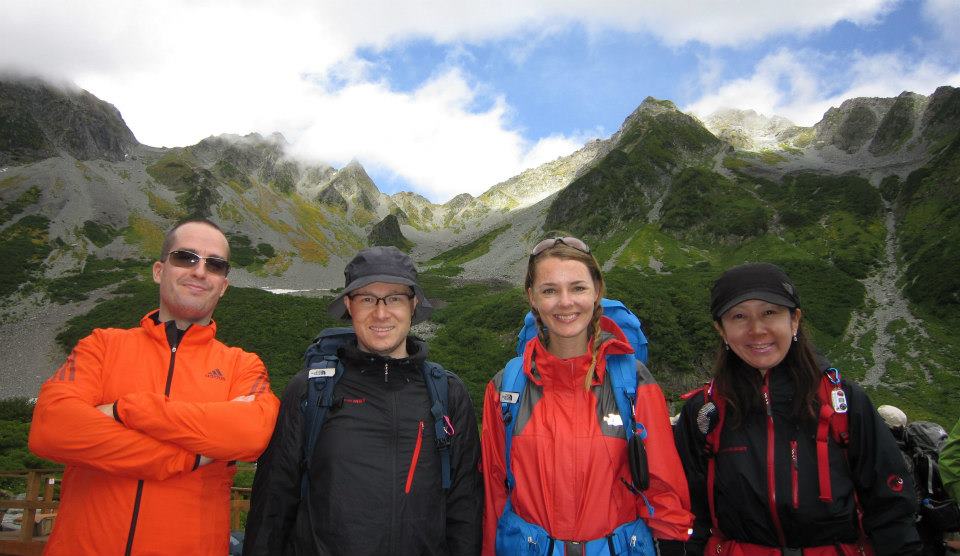 William, Jean, Tammy, and Yuko in the Karasawa Cirque

I stood above the waters of the Azusa River at Yoko-o and couldn’t help but smile: all adventures should start with suspension bridges leading to forested mountain sides.  It’s like you’re about to enter another world.  And, in a sense, I was.  I’d been as far as the Karasawa Col before, but never up to the Hotaka peaks, our goal for this particular trip.  My walking companions were Jean and Yuko from Tokyo and William who, like myself, lives in Nagano.  With the promise of new places ahead of me and three fantastic companions to enjoy them with, I was in a great mood. 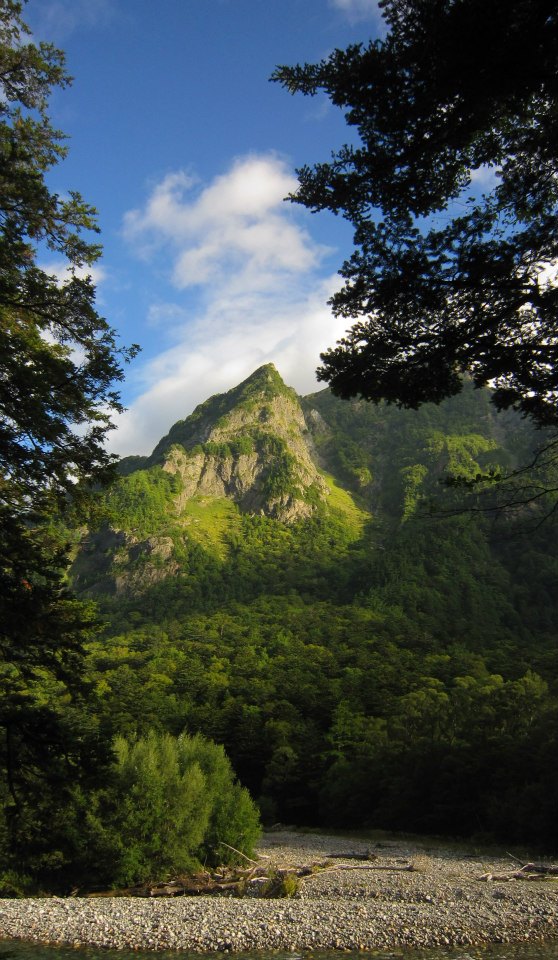 We’d arrived very early in order to get ahead of the crowds, but it seemed many other people had the same idea.  Nevertheless, the walking was very pleasant.  The mid-September sky was a brilliant blue.  Here and there along the Yoko-o Valley riverside, flowers were still in bloom.  Other hikers were examining them, but my eyes and camera lens were instead drawn to the spectacular peaks above: the rock-climber’s favorite, Byobu-iwa, followed by Maehodaka, Okuhodaka, Karasawa, and Kitahodaka. 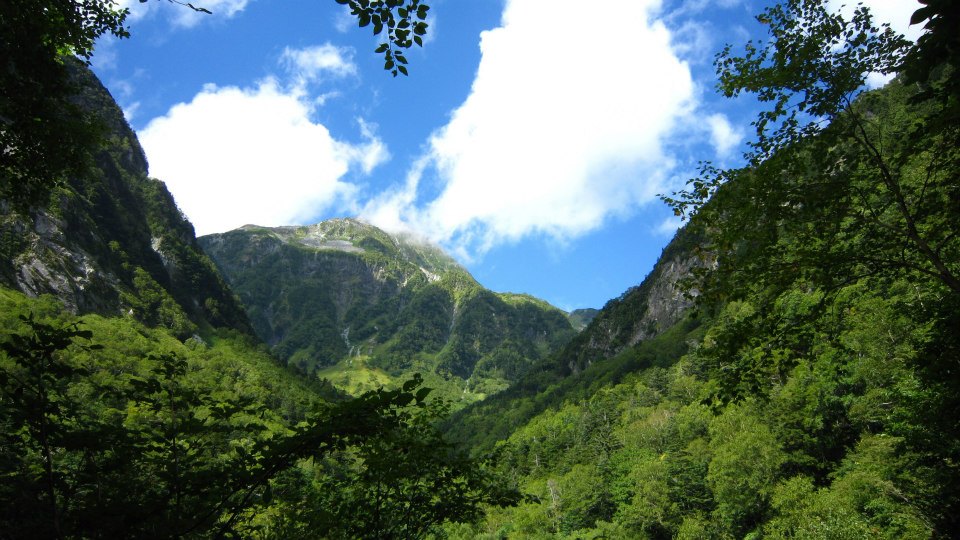 After passing over another hanging bridge, we began the winding ascent to the Karasawa cirque.  The mountainsides were covered in the lush growth of summer, making the valley appear much narrower than it had on my previous visit in late May.  Spring comes late to the Northern Alps and back then the area lay open and snow-covered.

After about 5-6 hours of walking from Kamikochi, we arrived at the Karasawa Hutte around midday.  A lazy afternoon drinking beer on the decks looked inviting, and we decided to stay the night.  We were told it would be two people to a futon, but since it was a long weekend it couldn’t be helped.  It seemed to me that the Karasawa Hutte had some kind of magical set-up.  Even with a huge influx of climbers, it wasn’t too crowded.  Between outdoor naps, good company, and mountain views, I passed as pleasant an afternoon as I ever have. 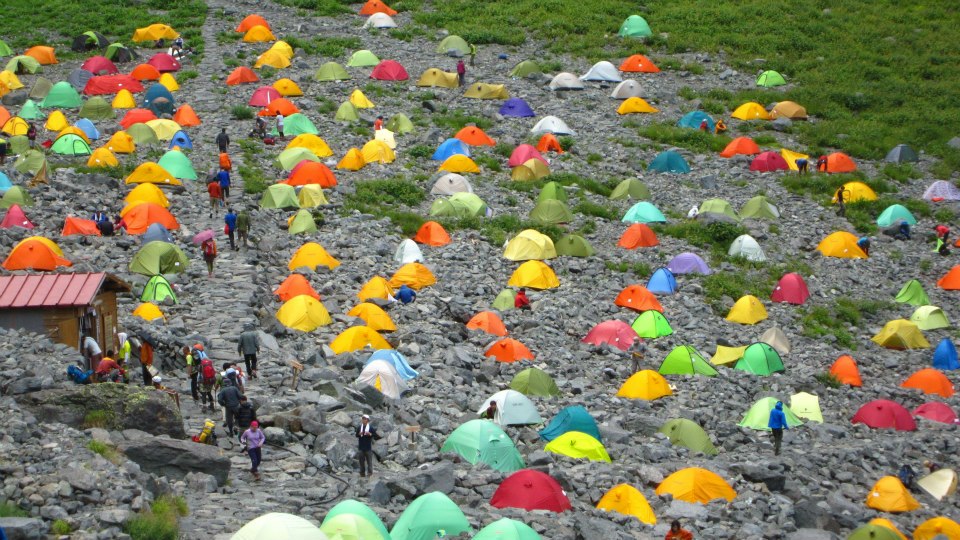 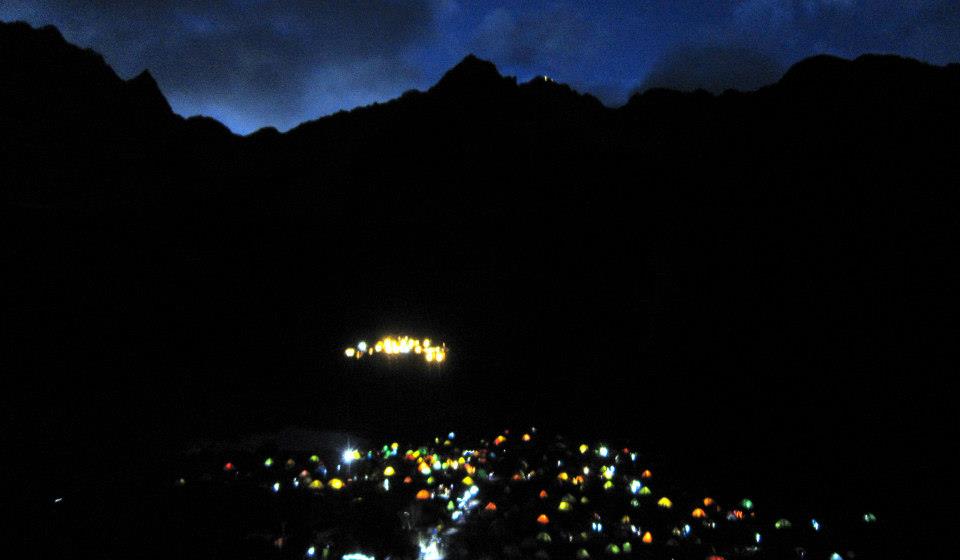 The next morning, we were climbing by 5am and ready for a different kind of terrain.  Our goal was Mount Kitahodaka and the Hodaka-dake hut.  In the cool pre-dawn darkness, the circles of light from our headlamps lit the way.  The many tents around Karasawa were lit up from within.  We climbed higher up the steep zigzagging track of Kitaho’s eastern flank, and before long the sun broke over the horizon, bathing the mountains in golden light.  The tents were far behind in the valley below. 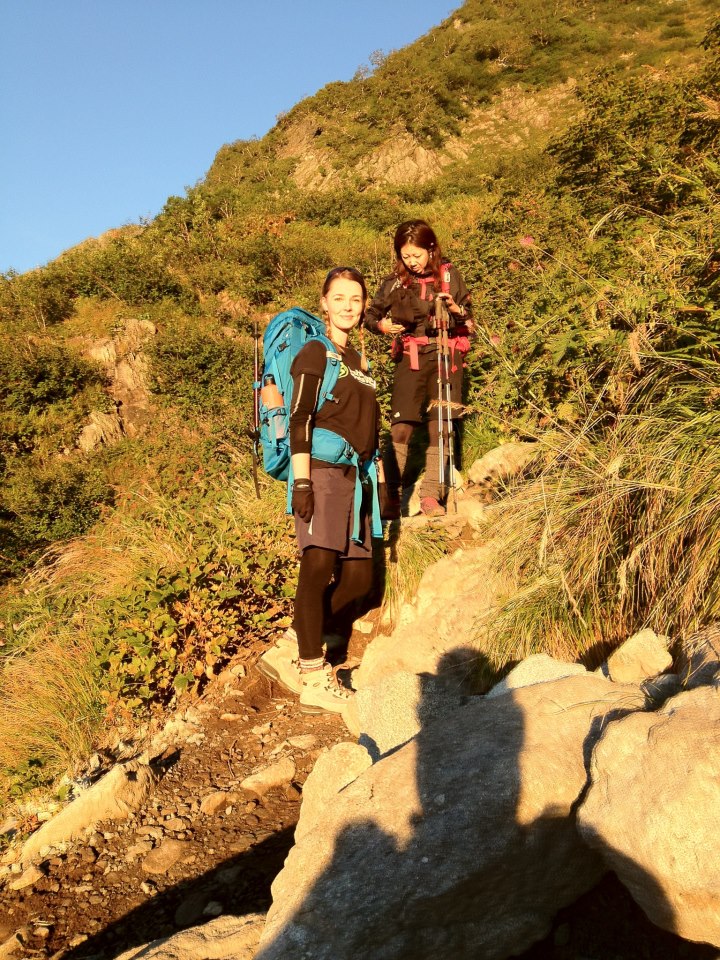 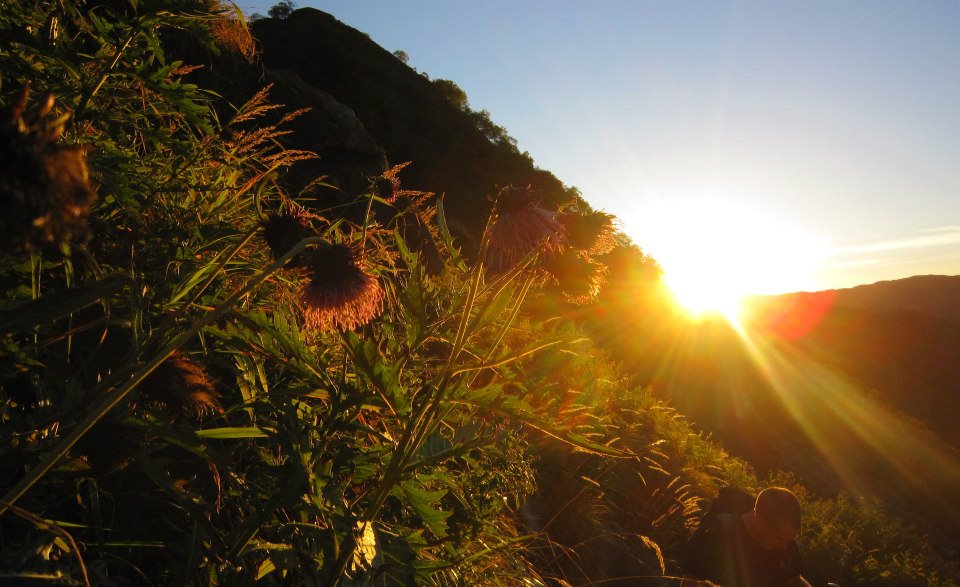 After an hour or so, we came across the “iwaba,” which involves using chains for support.  Here, we parted ways with Jean who, not being fond of steep ascents, decided to head back to Karasawa. 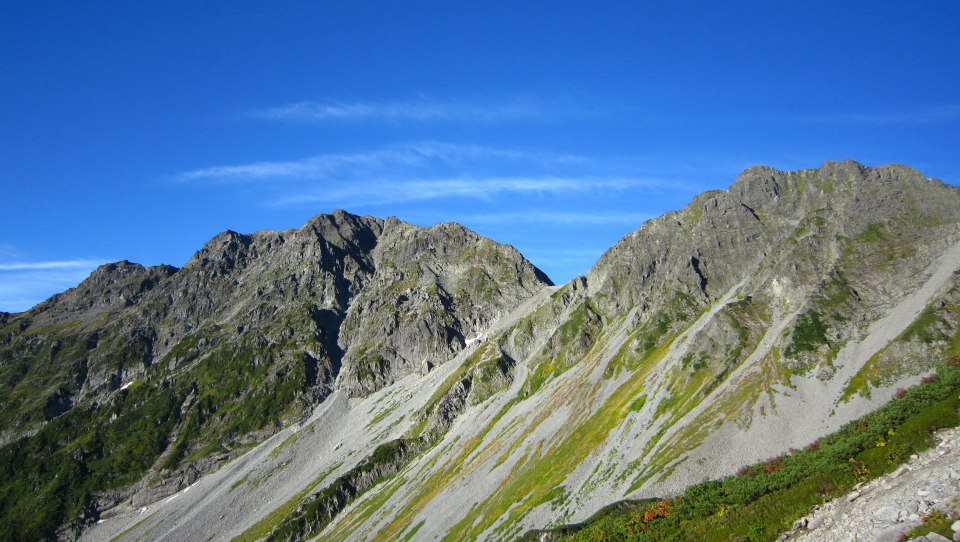 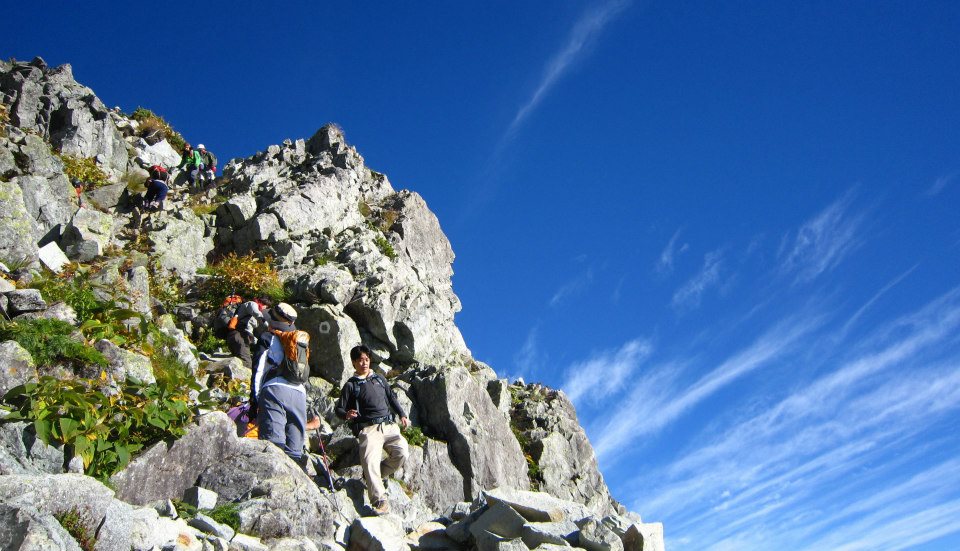 William, Yuko, and myself reached Kitaho’s 3160m summit at around 8am under a bright blue sky.  We could see as far as Mount Shirouma in the north, and Fuji-san far away in the south-east.  I excitedly made my way to the summit’s northern edge to get my first close up look at the Daikiretto, the famous knife-edge ridge leading to Mount Yari. 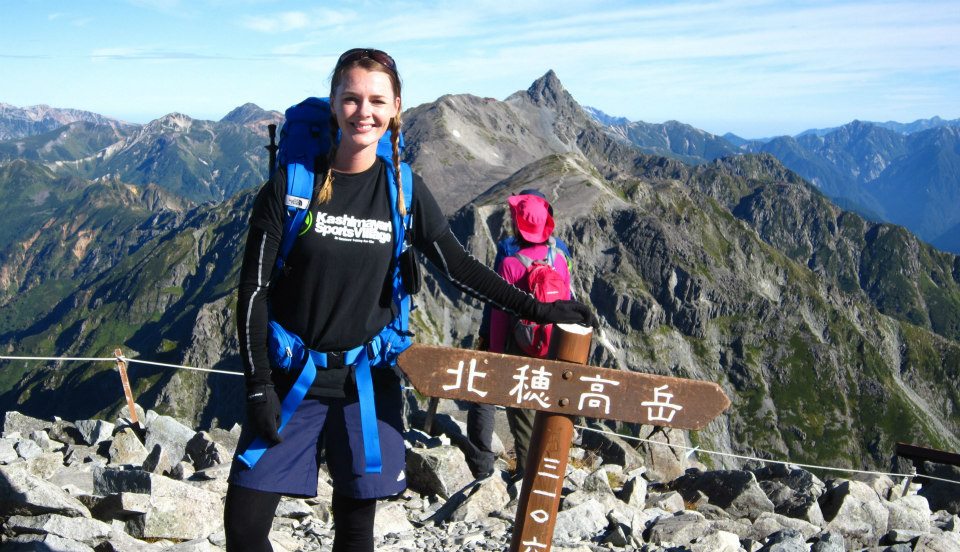 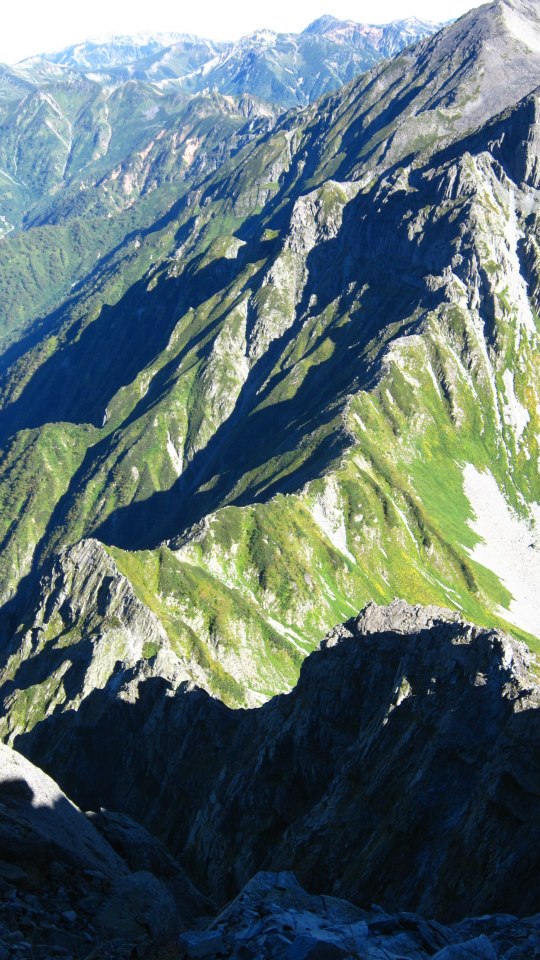 We had plenty of time on our hands, so before attempting our route, we decided to rest up at the nearby Kitaho Hut.  Situated right below the summit at over 3000m, it is the highest hut in Japan.  We perched on the rooftop deck to enjoy a second breakfast, and decided to come back one day to sit there under a roof of stars. 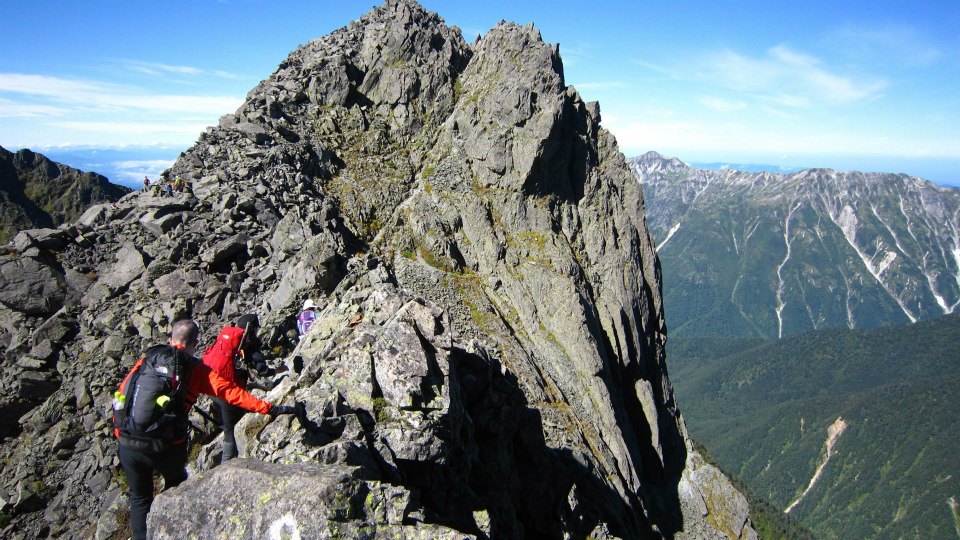 Start of the Kitaho-Karasawa traverse

Mountaineering maps in Japan sometimes have courses marked with the kanji 危 (ki) meaning “dangerous.”  These marks can look innocent enought, but they’re not to be disregarded.  Our course was marked in such a way, and had specific warnings for loose and falling rocks.  Although the first half of the traverse was more startling than challenging, I was kept busy enough that I took no photos.  With careful footwork and a good head for heights, though, this part poses no real problem. 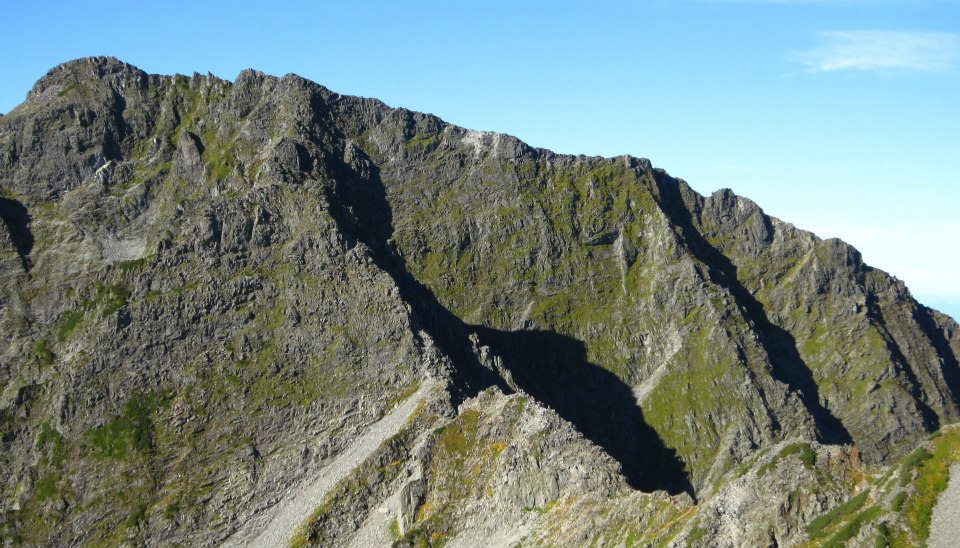 The difficult second half of the Kitaho-Karasawa traverse

The second half of the traverse is what the yellow 危 specifically applies to.  After passing the “kame,” a point resembling the hump of a turtle’s back, we arrived at the foot of a pinnacle of crumbly rock known as “Karasawa Yari,” for its resemblance to the spear-like Mount Yari mentioned above.  What followed was the toughest part of our journey.  We had to contend with loose rocks during the climb, and at one point, a large rock falling toward us from the slope above.  If you’re planning on following this route, it’s advisable to bring a helmet for this reason. 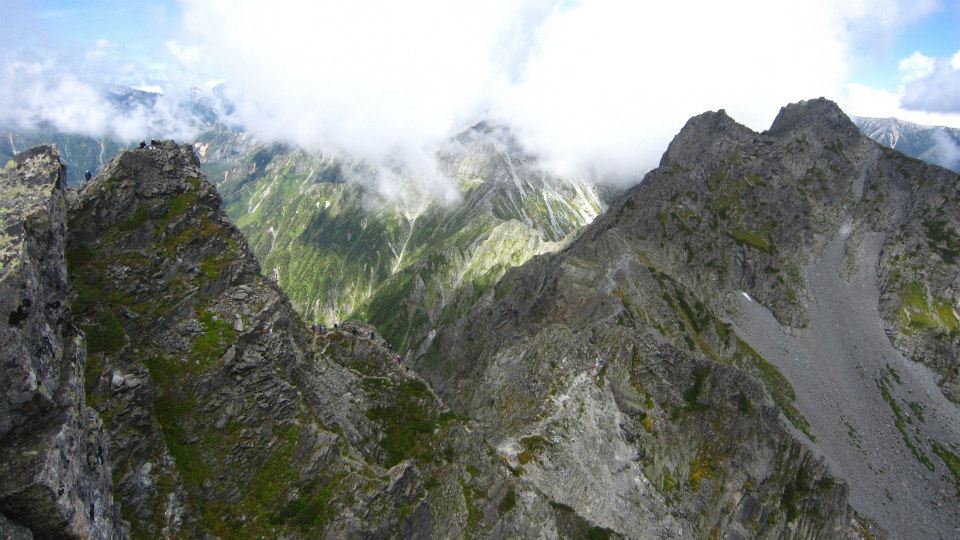 Looking back at Kitaho from the peak of Mount Karasawa

With the adventure on Karasawa Yari behind us, I was ready for a beer.  We descended to the saddle and signed in at the Hotaka-dake Lodge. 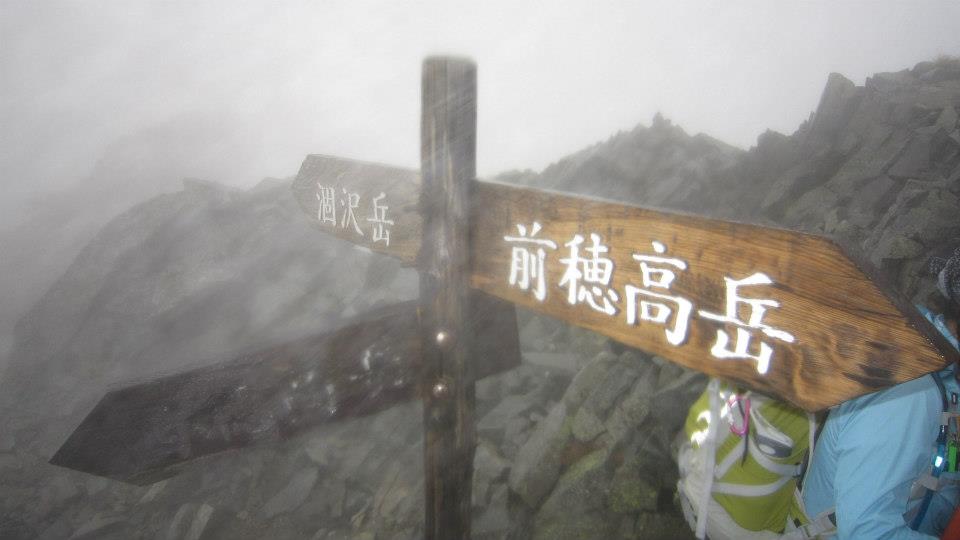 On the morning of our third day, we woke to strong winds and low cloud cover.  We had planned descent into Kamikochi via Maehotaka and Dakesawa, but instead summited Okuhodaka (3190m) before dropping back down into the cirque to meet Jean.  I smiled and loudly greeted everyone we passed on our way back.  Before I knew it, I was standing on the bridge at Yoko-o again  The weekend had been eventful, and some of the climbing quite challenging, but also full of fun and many beautiful sights. 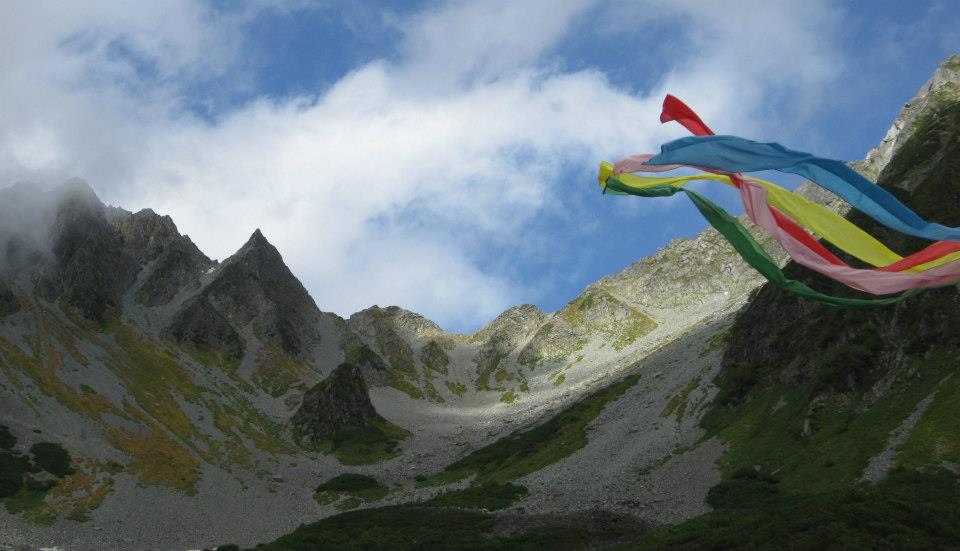 Of course, not all adventures in Nagano’s Northern Alps start with suspension bridges.  Sometimes, there are snowy valleys, or forest walks, or even vending machines and gondolas.  There are so many mountains out there to climb, and some of the most famous can be reached from routes beginning in Kamikochi.  Even as I sit in my living room as I write this now, I find myself looking forward to my next journey into the Alps.