Hello again!  We’re checking in once more with a much needed follow-up on our immensely popular post from yesterday (itself a verbatim translation of a post from the always stellar NPG Kamikochi blog).

It turns out that I was so eager to post news on the paths linking the Kappa Bridge and Myojin areas, that I failed to notice two earlier posts.

So, here is the rest of the key information along with some evocative pictures from the past week. 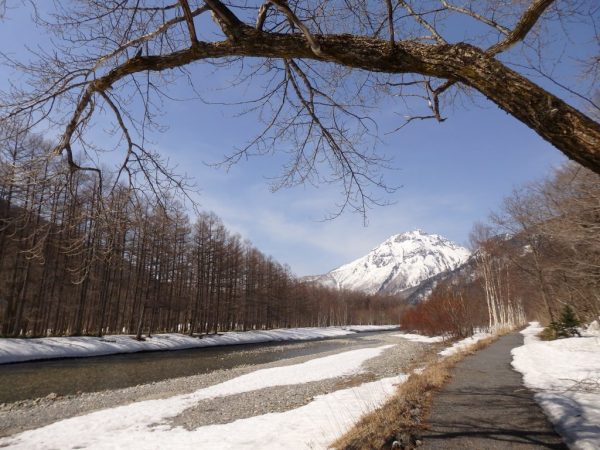 Yakedake on a clear day. One of Kamikochi’s most recognizable natural landmarks and one of the first you will see on entering the park.

Heading downriver from Kappa Bridge to Taisho Pond, you will see a lot of snow remaining on either side of the path.  However, on both sides of the river the paths themselves are clear of snow and may be walked on with relative ease.

To be precise, the path on the left bank of the Azusa River (Gosenjaku Hotel/Bus Terminal) has a road for vehicles which may be followed on foot.  The path on the right bank (Gosenjaku Lodge/Weston Relief) has a broad gravel path which may also be walked on as of April 17th.

Expect to see an accumulation of more than a meter of snow on either side of teh river paths which should deter you from approaching the riverside. 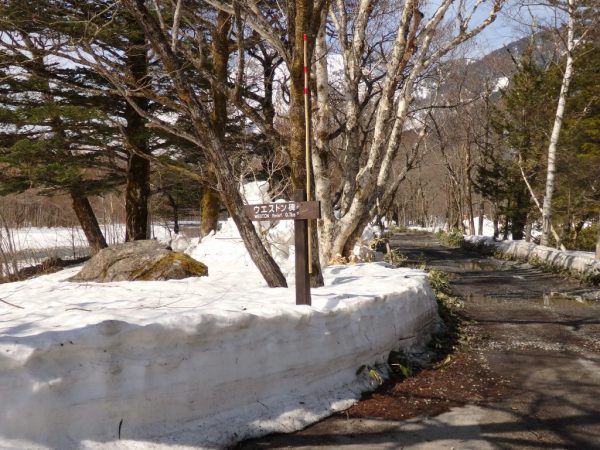 As a final note for anyone wishing to see Taisho Pond (recommended!), you might consider getting off the bus (or taxi) at the Taisho stop, then hiking to Kamikochi Bus Terminal as it is easier to catch a bus from the central area when you head back later in the day.  Or you could just do a loop hike from Kappa Bridge to Taisho and back if you have enough time.

2. Upriver (from Kamikochi Bus Terminal to nearby areas)

This all sort of goes without saying, given that yesterday’s post covered the paths from Kappa Bridge all the way to Myojin Pond, but the paths around Kappa Bridge are now basically open, with the caveat that icy patches make it difficult to walk in some areas. 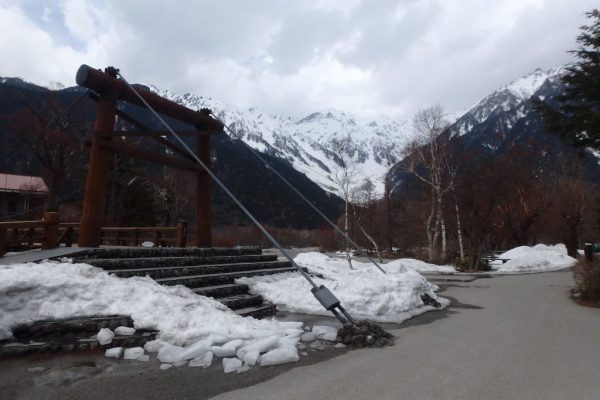 Here’s how things look on the walking path that runs along the left bank: 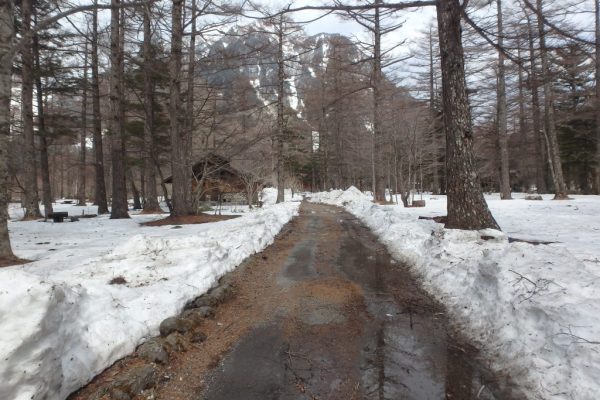 The path itself should present no problems to a sure footed hiker with appropriate footwear, though you can see how light footwear would get muddy and sodden.  Once again, a meter of snow along each side deters going off the path.

I mentioned the difficulty of following the path on the right bank in yesterday’s entry, but for the sake of comparison, you might expect to see patches of snow covered path like this at certain points along the way.  Please proceed slowly and carefully: 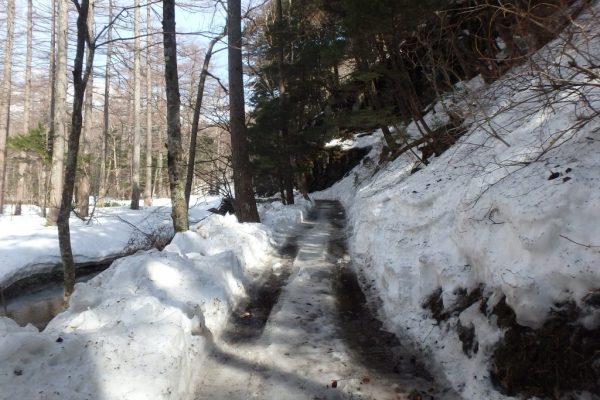 For those heading to Kamikochi in the near future, please remember to check the weather forecasts and prepare accordingly.  Some pictures are starting to trickle in from people who made the trek yesterday and they look splendid.

Lastly, thanks to the hard working bloggers at National Park Guide for keeping us in the loop.