Even with a some shock snowfall occurring last week in Matsumoto, we have to believe that the long winter of 2016/17 is just about behind us.  I’ll miss the camellia blossoms on the tree behind my house, but apart from that, I cant wait to see the back of it all.  After all, spring is a wondrous time in this part of the world.  The mountains of the Northern Alps keep their snowy caps, the air shows not a trace of summer haze, trees are flowering just about everywhere you look, and best of all, Kamikochi is set to open later this month.

For prospective visitors, this means two things: the opening of the Kama Tunnel on the 17th and the official opening ceremony, or “Kaizansai” (開山祭) on the 27th.  For obvious reasons, we don’t yet have pictures of this year’s event, so we’ll be cheating by sharing some from past events. 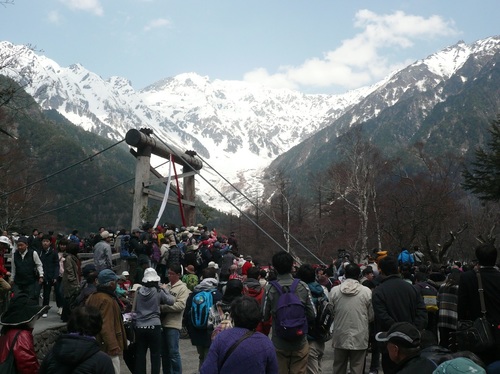 After five months of tranquil inactivity in the park, those tasked with running its many services are now hard at work getting the facilities ready for a host of eager visitors set to arrive when the Kama Tunnel opens on Monday, April 17th.
What we’d like to talk about here is the official opening that will follow 10 days later on the 27th.  The Kaizansai is best described as a series of events which take place in the Kappa bridge area following the official Shinto ceremony which opens the mountains to travelers for the spring season.  The observation of ceremonies is of great importance in Japan, and beseeching the gods for safe passage through their mountainous home is one of the main events of the calendar year. 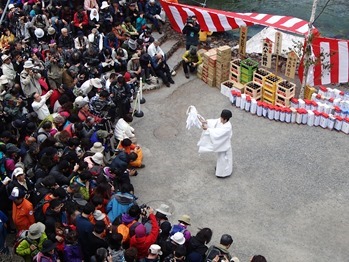 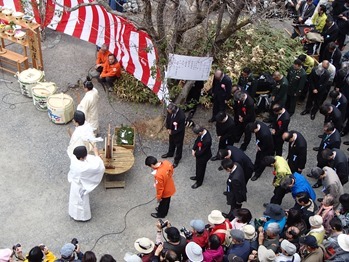 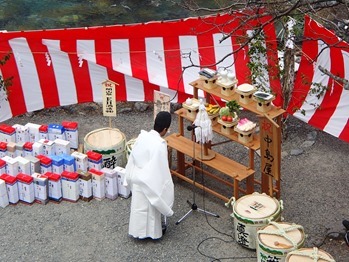 The first thing you may notice on arriving at Kappa Bridge (apart from the thousands of people gathered there) is the distinctive red and white banners that adorn walls and other surfaces throughout the area. These decorations, which also appear at graduation ceremonies and shrine festivals, are characteristic of major celebrations in Japan.  The large number of nihonshu bottles can also be attributed to the prominent role of rice wine in Shinto ritual.
But Kamikochi’s alpine culture has always displayed a mix of Japanese and European culture as confirmed by the alpen horn fanfare which heralds the opening of the mountains. 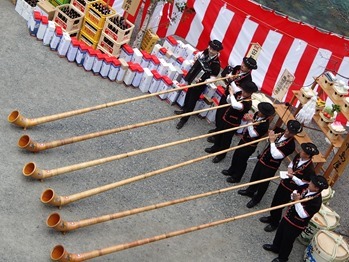 The fanfare is followed by the Shinto ritual mentioned above.  If you have never had the opportunity to see such a service, now’s your chance to experience a key facet of Japan’s native religion.
Less solemn, but perhaps a touch more colorful is the shishi dance which follows, as well taiko performances and other celebratory events.
Given the large number of people in attendance snapping photos, the area can become congested and difficult to traverse (especially for the elderly revelers making the scene).  We wish to remind everyone to be considerate of those around them and give way to anyone trying to navigate the crowd.
As mentioned above, The Kama Tunnel opens to buses and taxis on the 17th of April.  Prior to that date, you cannot enter the park by conventional means.
If you wish to take in the events at the Kaizansai, you should show up well before the start time of 10:50am on Thursday the 27th.  And please be advised that the weather could still be quite chilly, making things like hats, gloves, and warm jackets a must.  Even if you wind up stowing them in your pack, it’s better to have them on you just in case the weather turns blustery.  One final thing to bear in mind is that, while the park is open to the public ten days before the official opening, certain accommodations will not be up and running until the 27th.
That’s all for now.  We hope everyone who comes out to welcome the arrival of the new spring season has a safe and enjoyable time in Kamikochi.